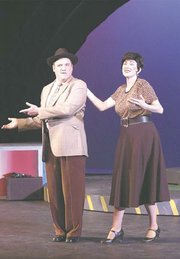 The musical comedy "Bye Bye Birdie" being staged by the Arlington Players takes off with energy and the driving beat of Broadway’s first rock-ish score when the teeny-bopper girls scream and swoon over a hip-swiveling singer in the days of Elvis.

The show premiered in New York nearly 50 years ago when the state-of-the-art "sound" of Broadway was "The Sound of Music" (although the strains of more adventurous fare were beginning to be heard with "Gypsy.") Then, the sound of the songs "Honestly Sincere" and "One Last Kiss," which were deliberately Elvis-like, was a bit of a shock. Today, they blend right in with more traditionally styled showtunes that make up the rest of the show’s score.

Birdie’s story concerns the plight of the agent/manager of that hip-swinging singing star. The agent, played by full-voiced Chris Gillespie, faces an uncertain future because his one saleable property, the recording star played with a surprisingly wholesome demeanor by Michael Bigley, has been drafted into the Army (a story stimulated by Mr. Pressley’s induction in March, 1958).

To salvage as much of the situation as possible, the agent arranges for the singer to bestow a goodbye kiss on a clean-cut all-American girl, the president of his fan club in Sweet Apple, Ohio.

Jordan Hougham plays that teenage fan with a clean, clear voice and a bright, blonde look. She and the chorus of her teenage friends give the show its full complement of energy and verve. Added to that is Allen McRae as her father who is insufferably anti-youth until he hears that his entire family will be appearing on the "Ed Sullivan Show" as the final civilian kiss is bestowed.

Today it is hard to imagine just how pervasive the "Ed Sullivan Show" was in the late 1950s and the early 1960s. Jay Leno at 10 o’clock may seem like an intriguing new programming venture for a network on the ropes. But in those days there weren’t hundreds of cable stations competing for viewers and a significant section of the entire American population sat down on Sunday evening to watch Sullivan’s variety show.

Its when the supposedly adult characters — other than McRae — take the stage that the Arlington Players’ production seems to bog down. The characters of the manager and his girlfriend/secretary are written with such out-of-date stereotypes that Gillespie and Anne Marie Pinto can’t seem to bring them to life in any kind of appealing way. Their "romance" is stilted and hard to root for.

On the other hand, Kat Brais as Gillespie’s domineering mother is very funny as she doesn’t even try to make a cartoon into a character. She just lets the apron-string humor take its own course, and her "A Mother Doesn’t Matter Anymore" gets the audience response it deserves … cheers.

Under music director David Rohde, the orchestra in the pit numbers 17 and they put out a rocking — if not rock — sound. The original orchestrations called for 26 players with as many as four flutes playing at a time. The scaled down version performed here still manages to exude a solid, jazzy feel anchored by a very strong reed section.