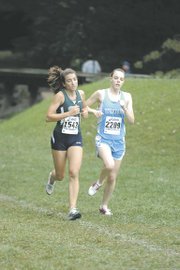 Jackie Dunbar's 17th place finish at the Monroe Parker Invitational cross country meet may not have been the fastest performance of the race, but it was a personal best on the 2.98 mile course.

"I started out faster than I normally do," the South County Secondary School senior said. "I just tried to hold on for the rest of the race."

Exhausted by the sloping hills on the Burke Lake course, Dunbar battled through fatigue and managed to beat her best time on the course by 20 seconds with a final time of 19:12.

"I'm just really happy that I improved on my time," she said.

Dunbar's performance wasn't the only surprise for the Stallions’ cross country team. Despite injuries and stiff competition, South County finished in sixth place in both the boys and girls team competitions.

"We had a lot of surprises today," Head Coach Robert Christie said. "A lot of people stepped up. The girls were just great out there today and overall I'm pleased."

The Stallions' boys team also had to overcome injuries to post their sixth-place team finish.

"Our top runner twisted his ankle during the race," he said. "Another one of our [runners] had jaw surgery and is just now starting to run again."

With the first race of the season over, Christie said that his team's depth should help them be a contender in the Patriot District.

"We just saw a lot of great things from the younger kids and we're excited for the rest of the season," he said. "The older kids know what they're going to need to do to be successful."

Woodson sophomore cross country runner Paul Gates hoped that he could use the race as a test of his abilities against some of the region's best runners.

Finishing with a time of 16:04, Gates turned in the best time of all the Woodson boys. His 12th place finish helped him gauge where he stands with the Patriot District's best.

"I stayed with the leaders for the first mile," he said. "In the second mile they pulled away, but in the third mile I just went all out."

"I just wanted to go out there and run my race," he said. "I was able to run the way I wanted to."

Though he didn't place in the top 10, the sophomore's cross country career is bright. Woodson's coach, Casandra DeVaughn is looking for Gates to be a leader this season.

"He made a major improvement today," DeVaughn said. "He's a sophomore and he is our No. 1 varsity runner. We're expecting him to perform well."

Last season Gates finished 16th at the district tournament and ran a 16:31 at regionals.

While Gates was Woodson’s top performer, DeVaughn quickly pointed out that many members of her young team exceeded expectations, giving the Cavaliers hope to compete in the historically strong Patriot District.

"We have a lot of new faces this year, but this was a great way to start out the season," DeVaughn said. "Our freshmen started off strong and now we're just looking for kids to work hard and step it up. We're in a good place for the season."

The Cavalier boys finished in eighth place in the team competition with 269 points. The girls finished 11th with a score of 338.

With one race completed this season, Gates said he's ready to use what he learned in the race to improve.

"I need to improve my endurance and work on my speed," he said. "[The Patriot District] is tougher and we all need to step up to meet the demands of the district."