Sports Briefs: West Potomac Falls to 1-1 with Loss to Westfield 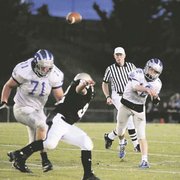 One week after blowing out rival Mount Vernon to open the season, the West Potomac football team lost to Westfield, 35-14, on Friday at WHS.

West Potomac (1-1) trailed 14-7 with less than a minute to play in the first half when the Wolverines had a punt blocked. The ball was recovered for a touchdown by Westfield (1-1), which entered the locker room with a 14-point advantage and eventually led 35-7 in the fourth quarter.

The Wolverines’ first touchdown came in the opening quarter, when quarterback Colin Mathewson connected with Shawn Lee for a 35-yard score, tying the game at 7. Mathewson also threw a 20-yard touchdown pass to Jalen Dawson with 40 seconds remaining in the fourth quarter.

Running back Darel Layne carried 12 times for a team-high 68 yards.

The Mount Vernon football team struggled on offense for the second straight game during a 33-0 home loss to T.C. Williams on Friday.

Mount Vernon lost its opener to rival West Potomac, 42-3, during which the Majors were limited to six first downs and 46 total yards.

"We’re a young team and we just haven’t found our step yet," Mount Vernon coach Tom Glynn said. "We’ve got no swagger. We’re just unsure of ourselves."

Mount Vernon (0-2) blocked a T.C. Williams punt in the third quarter and took over at the Titans 48-yard line. On the ensuing play, a Majors ball carrier gained 22 yards but fumbled the ball back to T.C. Williams at its own 26.

Majors coach Willie Medley said several of his athletes did not compete due to attending college leadership camp. The boys finished 26th out of 26 teams and the girls did not record a team score.

The girls were without senior and No. 1 harrier Corinthia Evans. The battle for the No. 2 spot will be between sophomore Rachel Nelson and freshman Bridget Thompson. Evans placed fifth in Saturday’s junior varsity race and Thompson was 37th in the freshman race, according to Medley.

Mount Vernon’s top finisher in Saturday’s varsity race was Regina Thompson, who placed 120th with a time of 22 minutes, 18.25 seconds.

"Overall, the performance of the girls, I’m pleased with where we are," Medley said.

On the boys side, senior Angel Medrano was the Majors’ top varsity finisher, placing 90th with a time of 17:29. Medrano is Mount Vernon’s No. 1 boys harrier.

Andrew Perez competed in the junior varsity race but is slated to be the Majors’ No. 2 varsity runner. Alex Kerr is the No. 3.

Medley said he just wanted to see his athletes finish their season-opening race.

"That gives us a base, a foundation for the rest of the season," he said.