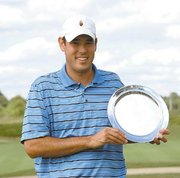 In the finals on Aug. 31, Arlington’s Jimmy Delp won his first state title by beating medalist Jason Copeland from Virginia Beach, 1-up.

"This is first big title that I’ve won in a long time," he said afterward

And he won with considerable style. Leading 1-up going into the par-5 18th hole, he elected to go for the green in two. He hit a 6-iron from 210 yards to within 15 feet of the cup, while Copeland chipped his third to within 14 feet. When Delp’s putt settled inches from the hole, Copeland conceded the match.

Delp had built a 4-up lead by the ninth hole in the finals, but his lead dwindled. Suddenly only 1-up on the par-3 14th, Delp made matters worse when his tee shot leaked into a greenside bunker.

"I made the best up-an-down of my life on that hole," he said.

He and Copeland halved the hole, Delp regained his momentum, and Copeland stayed in the match through 18 only with great scrambling around the green.

A 2002 George Mason graduate, Delp, 30, lives in Balston and works for the facilities management division of the U.S. Department of the Interior.