Lively, Loving Spoof Of Musicals Back at MetroStage 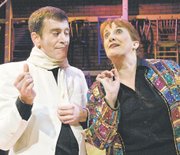 Bobby Smith and Donna Migliaccio star in "Musical of Musicals."

If you know your Rodgers and Hammerstein, Andrew Lloyd Webber, Stephen Sondheim, Jerry Herman and Kander and Ebb backward and forward you will be thrilled to know that the sharp sendup of each and every one of them has returned to Alexandria’s MetroStage. The show was tremendous fun in 2007 and this revival is, if anything, just a tad funnier and tighter.

The title itself signals the way the creators of this four-character, five-target spoof treat their subject. They call it "The Musical of Musicals: The Musical!"

The concept is simplicity itself. A cast with exceptionally strong musical theater voices works through one simple plot five different times, each in the style of a different composer/lyricist. The plot is the old standby of melodrama, the innocent young girl who can’t pay the rent and the young man who comes to her rescue when the evil landlord threatens to take advantage of her misfortune.

For Rodgers and Hammerstein, the plot is rendered "on fields of golden corn stretched out to the horizon ... it’s Kansas in August." A cowboy pretends not to be in love with pretty June who sings "I Couldn’t Keer Less About You" until the landlord, Jidder, demands a rent she can’t pay.

No pun seems too much of a stretch as long as it includes a simultaneous reference to at least two different songs or, better yet, two different shows. "Mother Abby" comes to the rescue with the sung advice "There’s a rainbow o’er the mountain / and that rainbow is your dream / you’ll find it when you’ve faced the storm / and forded every stream."

A Stephen Sondheim sendup, set in an apartment complex called ‘The Woods,’ gets the title "A Little Complex" while the Jerry Herman style star-vehicle (a la "Mame") is "Dear Abby."

They take on Andrew Lloyd Webber’s sung-through musicals ("We Never Talk Anymore" they sing) with the often-repeated melodies ("I’ve Heard That Song Before") that some say sound like arias from old operas (one lyric goes "it might sound a teeny / like something by Puccini. But no, its all brand new").

Kander and Ebb’s "Cabaret" ends up as "Speakeasy."

In New York the show was a hit Off-Broadway, being brought back for a return engagement at the York Theater. The cast there was very good and even included the composer and the lyricist who created the superb send-ups of the styles of Broadway’s biggest successes. Here at MetroStage, however, the cast is better.

Donna Migliaccio, who is Broadway bound to appear in the new production of "Ragtime" next month, has great fun with the role of the advice-giving woman known in the different musicals as Mother Abby, Auntie Abby, Fraulein Abby, just Abby and Abigail Von Schtarr. She’ll play the role until Sept. 13 when she leaves for New York at which time Heather Mays steps in to finish the run.

Janine Gulisano-Sunday is as bright and energetic as could be asked of an Ingénue who has to face the threats of five different evil landlords. Bobby Smith goes from the slightly dim-witted Jitter of the opening "Corn!" to the insane killer/artist of the Sondheim spoof ("I’ll make them pay in a crafty way. I’ll kill them and coat them with papier mäché. I know they say I’m no Monet. Que sera, Que Serurat. Oh, What the hey!") Then he acts as the host of a Speakeasy in the style of the emcee of a cabaret ("The world can go to blazes / who cares? It doesn’t faze us. / We’ve got Booze / And songs that use a lot of foreign phrases!"). New to the cast this time around is Matthew A. Anderson who is a delight in the young hero role.

The show might have been better had it been trimmed a bit. Four spoofs might well be better than five. But the weakest of the bunch, the Jerry Herman burlesque, is strong enough to garner many, many laughs and, had they cut it, you wouldn’t get a chance to see Migliaccio bent over backwards onto the top of a piano while she belts out "Who cares if you’re over the hill now as long as you’re over the top?"

Ticket prices have gone up a bit since 2007, but even at an additional $5, this is a show no one who loves musicals and loves laughing should miss.