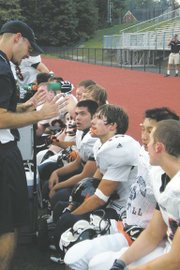 Despite being one of the Spartans' smaller defenders, Joey DeSantis, fourth from right, is one of the Spartan's defensive leaders. ‘I'm a little bit smaller than most guys out there on the field, but I'm just looking to get the job done,’ he said.

At West Springfield High School, middle linebacker Joey DeSantis knows that if he wants to help the Spartans capture its third district football title in three years, his actions will need to be bigger than his 5-foot-9-inch stature.

"I'm a little bit smaller than most guys out there on the field, but I'm just looking to get the job done," DeSantis said. "I may not make the highlight reel play, but I want to be the solid player."

In the Spartans’ 35-21 scrimmage victory against Riverbend High School on Thursday, Aug. 27, DeSantis displayed why he is one of the team's defensive leaders.

"I'm an old-school player," he said. "I don't try to make a lot of fancy plays. I just try to cover my assignments. I see myself as [Redskins' linebacker] London Fletcher. I'm not going to get a lot of media or glory, but that's not what I'm looking for."

DeSantis prides himself on being a mistake-free defender. During the scrimmage, he helped the Spartans hold Riverbend High scoreless in the first half.

"I thought we came out strong," he said. "We held them back in the first and our defensive line looked good."

West Springfield takes pride in its defense, displaying signs that advertise the squad as "relentless with honor," and a team motto of "defend and destroy."

"I think the defense will stack up well," DeSantis said. "We have Matt Rose who is 285 pounds and Maurice McKinney who's about 250. We're going to hold up [well] against everybody."

"My size helps me throw guys around," he said. "Being an offensive lineman isn't a glory position, but it's fun to throw kids around and block."

Though Justice and DeSantis had strong performances in the scrimmage, Head Coach J.T. Biddison said that the team still has work to do to get ready for the season opener against Edison High School on Friday, Sept. 4.

"There's still a lot concerns," he said. "We gave up more touchdowns than I'd like to."

Biddison said that the team needs to focus on containing turnovers, but he did see some positives in the scrimmage.

"Our offensive line did a real nice job protecting the quarterback, and our defense and inside linebackers are playing well right now."

Biddison took over as head coach from Bill Renner and previously was the head coach at Marshall High School for six years. The transition has gone well, he said, but the team is still trying to define its playing style.

With the pre-season over, Justice said that it's time for the team to learn from its mistakes and refocus on its goal.

"We just want to win it all and be Patriot District Champion three years in a row," Justice said. "I also want to beat Lake Braddock, they've been calling us out recently."