Chargers Look for Leadership at Invitational

Chantilly misses tournament round, but displays offensive power against opponents. 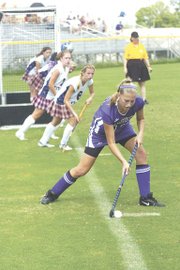 Setting up a penalty corner shot, Besty Stipa tries to find an open player for a shot on goal. "I try to get to the ball as much as I can and tell the other girls where to be and read the field," she said.

Sometimes the best player on the field isn't the one with the hardest shot or quickest feet. At the Bulldog Invitational Field Hockey Tournament on Aug. 28 and 29, Chantilly High School's Betsy Stipa showed that strong field vision is just as valuable.

"I try to see everything," she said. "I try to get to the ball as much as I can and tell the other girls where to be and read the field."

As one of the Chargers' team leaders, Stipa used her skills of observation to help set up her teammates and lead the Chargers to a 3-1 record at the tournament.

"Sometimes you can just see the play happen and you get this [adrenaline] rush," she said. "Then it's so rewarding when you do score. Scoring a goal is the best feeling you can get in a hard game."

Stipa scored two goals at the tournament, including a highlight reel no-look goal during the Chargers 3-0 victory against Edison High School.

With the ball near Edison's goal, Stipa quickly spun around and sent the ball toward the net. The ball trickled past the Edison defenders and surprised Stipa and the goaltender when it landed in the back of the net.

"I didn't plan [on scoring that goal]," Stipa said. "I was just trying to pass towards the goal. It just happened to go in. It was really cool."

While Stipa's performance was one of the highlights for the Chargers at the tournament, the overall team performance disappointed Head Coach Ralph Chapman.

"I didn't feel we were playing at the level I knew we could play," Chapman said.

The Chargers were the 2008 field hockey state champions and were one of the favorites to win the Bulldog Invitational.

Chantilly opened the tournament with a 3-0 win against Langley High School, but was upset by the eventual champions, West Springfield High School, in a 2-0 loss.

"We didn't have intensity, we didn't make good passes, we just didn't finish," Chapman said. "We should have come out and buried [West Springfield] but their defense made saves. They're a good team, they deserved to win."

The Chargers dominated much of the West Springfield game but couldn’t crack the Spartan's strong defense.

Forward Sarah Dunaye said that the Chargers’ lacked intensity as the team entered the game.

"We weren't pumped up," Dunaye said. "We weren't ready. We didn't have a good warm up and I think that really hurt us."

Though the Chargers were deflated by the loss, Stipa said that it's just one of the lessons that a team needs to learn in order to get better.

"Anyone can win on any given day," Stipa said. "Someone has to step up. I feel like the girls respond to leadership."

The West Springfield loss also helped the Chargers to refocus for the tournament’s second day. "We picked up the energy," Stipa said. "We really played like a team.

The coaches helped us get pumped up. They told us to have more energy."

The extra motivation helped Chantilly to finish the tournament with a 3-1 record with wins against Langley High School, Thomas Edison High School and T.C. Williams High School. The Chargers scored a total of eight goals scored and allowed only three in the four games the team played during the tournament.

"If [the team] plays at the level I know it can play at, we'll be contenders," Chapman said.