Lanier Student Is In Christmas Play 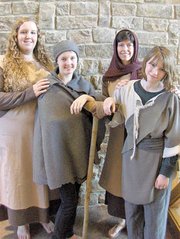 A Fairfax student is playing the lead in a local production of “Amahl and the Night Visitors.” She’s Erin Sullivan, 13, an eighth-grader at Lanier Middle School.

Featuring a cast and crew of 72, the show is double cast and told from the viewpoint of a 10-year-old boy, Amahl. He’s disabled and he and his mother live in a hut and have fallen on hard times.

He tells tall tales so, when he sees the Star of Bethlehem and tells her it has a tail as big as a kite and moves like a chariot on fire, she doesn’t believe him. Later, he hears the three wise men singing on their way to see baby Jesus. Weary, they stop at the hut, and the mother doesn’t initially believe Amahl when he tells her three kings are there.

They spend the night, and shepherds bring food and entertain them. But after they’ve gone to sleep, the mother decides to steal the gold they’re bringing to the baby. “What I could do for my child with that,” she says, but a page stops her.

“Then the kings say she can keep the gold, and they sing an aria saying the child they seek doesn’t need gold,” said Director Denise Freeland. “But as they’re leaving, she says, ‘No, take the gold — for such a king, I’ve waited all my life.’ Amahl offers his only possession, his crutch, as a present, and then a miracle happens.”

Erin describes Amahl as someone who’s “curious and likes to make things up to make his life more enjoyable. He’s friendly to people and is a fun character to play. It’s cool to be so curious and have a different view of things. Although he has so little, he thinks he has so much. And it’s a really nice experience playing the lead.”

Her favorite number is “Have You Seen the Child?” sung by the three kings and the mother. “I love the harmony in it and how passionate the mother is about her child,” Erin said, adding that the audience will like the family’s closeness and “how Amahl comforts his mom, even though they’re flat broke.”

“It’s a powerful story and a fabulous reminder of the meaning of the holiday season,” said Freeland. “People will be touched, inspired and entertained.”