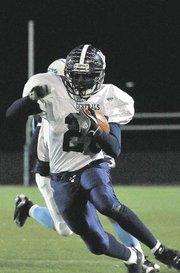 Washington-Lee running back Anthony Johnson rushed for 138 yards and a touchdown in the Generals' season-ending loss to Yorktown on Friday.

Yorktown receiver C.J. Bartholomew sensed the importance of the moment. Leading 14-10 late in the first half with a playoff berth on the line against Washington-Lee, the senior had a message for head coach Bruce Hanson.

Bartholomew caught a 35-yard pass to get Yorktown to the Washington-Lee 12-yard line with less than 30 seconds remaining in the second quarter. After an incompletion, Bartholomew had another message — this one for quarterback Sam Nottingham.

"I was like, ‘Sam, throw me the ball," Bartholomew said.

Nottingham listened and connected with Bartholomew, who made a leaping grab in the end zone, for a touchdown and an 11-point Patriot lead. The Yorktown defense took over after the momentum-grabbing score and the Patriots held on for a 28-10 victory on Friday at Yorktown High School.

"[Nottingham] threw it up to me," Bartholomew said of his key touchdown reception, "I just went up and got it."

THE WIN secured a playoff berth for the Patriots. Yorktown (6-4) is Division 5’s No. 6 seed in the Northern Region and will travel to face No. 3 Hayfield at 7:30 p.m. Friday. Hayfield defeated the Patriots 27-19 on Sept. 25 at Yorktown.

After winning their opener, the Patriots experienced a three-game losing streak and were 2-4 after a 42-10 loss to Edison on Oct. 9. Since then, Yorktown has won four straight games and enters the postseason with momentum.

"We faced a lot of adversity," Yorktown senior linebacker Charles Banks said. "We had a bunch of injures but we overcame that. This is the team we should have been at the beginning of the season, but it just took us a while to get there."

On Friday, Yorktown jumped out to a 14-0 first-quarter lead on a 2-yard run by Khalil Doles and a 20-yard interception return by Jordan Smith. But things wouldn’t be easy for long.

Washington-Lee running back Anthony Taylor raced 77 yards for a touchdown on the Generals’ ensuing possession, cutting the Yorktown lead in half. Washington-Lee drove inside the Yorktown 10 the next time it had the ball, but had to settle for a 24-yard Chris Almquist field goal, pulling the Generals to within four early in the second quarter.

While the drive led to points for Washington-Lee, the Generals lost Taylor to an ankle injury. The senior returned in the second half and made an immediate impact, rushing for 30 yards and completing a 13-yard pass to Karl Lendenmann during the Generals’ second drive of the third quarter. But while Washington-Lee drove to the Yorktown 20-yard line, the Generals came away empty with a missed a field goal attempt.

AT THAT POINT, Washington-Lee trailed by 11 and struggled moving the ball the rest of the night.

Doles scored Yorktown’s final touchdown on a 1-yard run with10:36 to play in the fourth quarter. The junior carried 20 times for 61 yards. Bartholomew caught four passes for 75 yards. Nottingham completed 8 of 16 passes for 140 yards.

Taylor rushed 12 times for 138 yards and a touchdown for the Generals.

While Washington-Lee fell short, the Generals (5-5) overcame an 0-3 start to the season to give themselves a chance at the playoffs. After being outscored 114-14 in losses to McLean, South County and Hayfield, Washington-Lee responded by winning four straight games and five of its next six.

But the Generals couldn’t keep it going against Yorktown. Washington-Lee turned the ball over on its first two possessions.

"We went back to what we were doing at the beginning of the year when we had turnovers and that killed us," Washington-Lee head coach Josh Shapiro said. "We gave them 14 points right off the bat."

After the game, Hanson was recognized for his achievements during 25 years as head coach of the Patriots. Hanson has never lost to Washington-Lee during his head coaching tenure at Yorktown.

But what if the Generals had won on Friday?

"I would have just walked off the field," Hanson said.

Instead, the Patriots are on a roll heading into the playoffs.