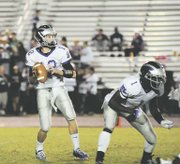 West Potomac seniors Colin Mathewson, left, and Darel Layne will play in their final game as Wolverines on Friday against Annandale.

The West Potomac football team has been on a roller-coaster ride since quarterback Colin Mathewson’s Oct. 16 returned from a knee injury.

In Mathewson’s first game back after missing parts of four, the Wolverines snapped a five-game losing streak with a 14-7 win over Robert E. Lee in wet, muddy conditions. Wolverines special teams scored a safety and a touchdown (Daryl Copeland kick return), and a defensive touchdown by Paul Marinelli sealed the victory.

The following week, Mathewson passed for a school-record 438 yards and a record-tying five touchdowns in the rain against T.C. Williams, but the Wolverines came up short, 38-37. Receiver Daryl Copeland also had a big game, catching seven passes for 245 yards and four touchdowns.

Unfortunately for the Wolverines, the ride’s descent came last Friday in the form of a 49-6 loss to Lake Braddock — West Potomac’s most lopsided loss since losing by 65 to Robinson in 2004. The Wolverines took a 6-0 lead in the first quarter Friday when senior linebacker Shakil White returned an interception 44 yards for a touchdown. But it was all downhill from there as Lake Braddock responded with seven unanswered touchdowns.

The Wolverines complete their ride at 7:30 p.m. Friday when they host Annandale in both teams’ regular season finale. Both teams enter the game struggling. West Potomac is 2-7, 1-5 in the Patriot District, and Annandale is 3-6, 1-5 in the district, and has lost six consecutive games.

With the playoffs likely out of the question for both teams, West Potomac head coach Eric Henderson said he’s looking for the Wolverines to finish the season on a positive note.

"We’re trying to focus on what we can do well, get people into position to make plays and execute," Henderson said in an e-mail. "Practices have gone smoothly and we hope for a good effort from the team. … We talk about how we leave the season and the sport — about leaving something positive to build on. Great effort, positive behavior, acting with class — all those things we want to emphasize."

Before the season, Henderson spoke of the offense’s potential. Running a no-huddle spread offense, the Wolverines had an experienced offensive line and several playmakers. While things haven’t worked out, due in part to injury, the unit showed its capabilities in a shootout with T.C. Williams.

"It was fun," Mathewson said. "It was the best game I ever had. … I would have taken a win over 400 yards and five touchdowns. If we had won [we would have been] in the playoff race. I’d take that over anything."

While Mathewson will play his final game for West Potomac on Friday, Copeland, a junior, has one more season.

"I thought they both had a really positive game and we saw flashes of what we thought we could be," Henderson said. "I think Copeland has a bright future and can play football at a high level. For Colin, his season was pretty rough with the injury at Chantilly so it was good that he was able to put together a complete game and get his team in position to win."

"I’m very fond of them [seniors] personally," Henderson said. "Many of them were students of mine and we’ve been through quite a bit together. We all wish that things could have gone differently but I’ve enjoyed my time with them and I know they will go on to great things in college and beyond."