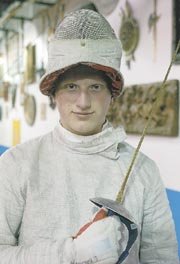 Despite a crammed schedule of school and fencing, Sasha maintains a 4.25 GPA despite frequent travel around the world. ‘Every [fencing] competition is a battle with homework. It's not very fun, but it's worth it,’ he said.

Hayfield Secondary School student Sasha Ryjik, left, leaps at an opponent to score at touch. Ryjik is a member of the United States National Fencing Team and finished second at the Individual Cadet World Cup in Konin, Poland earlier this year. 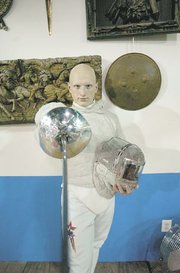 Outside of fencing, Sasha Ryjik enjoys playing violin and soccer, but traveling for fencing takes up a majority of his time. ‘I go to fencing competitions almost every weekend,’ he said.

Alexander "Sasha" Ryjik is truly a Renaissance man. He excels at playing the violin in the Hayfield Secondary School orchestra, is a skilled soccer player and even won third place in a science fair.

Just when you think that Sasha couldn't possibly have another impressive skill to wow people with, he pulls out his prized possession, a United States National Fencing Team windbreaker.

"It's probably the coolest thing that I own," the 16-year-old said. "There's only 27 members on the United States Men's Saber Team. So that means there's only 27 of these [windbreakers] out there."

Sasha beams with pride when he wears his red, white and blue training gear, but the road to earning the jacket has been arduous.

Sasha's fencing career started when he was 9, under the guidance of his father, Alexandre Ryjik.

"[My father] introduced me to the sport and I fenced casually at first," Sasha said. "I didn't really like it but I grew into it. I stared with the foil and now I use the saber."

As a child, Alexandre studied fencing at Soviet schools in Leningrad. When Alexandre immigrated to America in 1990, he opened the Virginia Academy of Fencing in Springfield 13 years ago.

"In Russia, I was a pretty good fencer, but just a fencer," Alexandre said. "When I came here, I realized I was one of the best coaches there could be [in America]."

Under his father’s guidance, Sasha continued to advance his skills and notoriety through various tournament victories.

What started as a vague interest in the sport blossomed into full-fledged passion.

"[Fencing] challenges me mentally and physically," Sasha said. "There's a bunch of adrenaline going in you, you're trying to control your feelings and thoughts, and think about what your opponent is going to do."

Now, as a member of the United States National Fencing team, Sasha is considered a world-class athlete and competes worldwide.

"I go to fencing competitions almost every weekend," Sasha said rattling off a recent travel schedule that included trips to Poland, Hungary, Iowa and Canada. I go to Kansas City next weekend," he said.

The travel has been worth it and his recent tournament wins include victories in high-profile competitions.

The tournament schedule is so jam packed that Sasha only trains three days a week when he isn't preparing to travel for another competition.

He said he strains to keep up with his homework, but thanks to some understanding teachers, he has been able to maintain a 4.25 GPA and turn in his work on time.

"The teachers are fantastic and understanding of my fencing," Sasha said. "Every competition is a battle with homework. It's not very fun, but it's worth it."

Sasha's mother, Anna Ryjik, said the amount of travel can be hard for the entire family.

"It's interesting to have a son who is more traveled than yourself," Anna Ryjik said. "[Alexandre] usually accompanies him to other competitions and I go to the major ones."

Sasha's rise in the fencing community hasn't been as simple as jumping on a plane and winning foreign competitions.

At times, the relationship between coach and athlete can make the bonds of father and son difficult for Sasha and his father.

"[Coaching your son] is something I might wish on my worst enemy," Alexandre said jokingly. "It's very difficult. As a coach you have to be tough and demanding, but usually with a coach, the player leaves and goes home to his parents. Sasha has to come home with me."

Sasha said that it's a tough-love relationship on the fencing strip, and although it can be frustrating at times, he's thankful to have his father's guidance.

"We love each other and sometimes we yell and get heated," he said. "But my favorite fencing moment was winning my first national championship when I was 14. There's this photo of me jumping into my dad's arms after we won. It was very special for us."

Despite the sometimes heated practice sessions, Sasha isn't afraid to joke about comparing his own fencing to his father’s.

"I'm better [at fencing] than him now," Sasha said with a smile. "I can beat him, but it's getting a bit easy."

For now, Sasha is focused on his current fencing career and has yet to scout out a college to attend. Thoughts of competing at the Olympics play in his mind.

"In three to four years, I'll focus on it," Sasha said. "You can't just say you want to go to the Olympics. It takes years of work and toiling to get there. You never know what is going to happen."