Chantilly, in weather-forced postponement, gets second-day goal from Kristen Melchiori in 1-0 triumph. 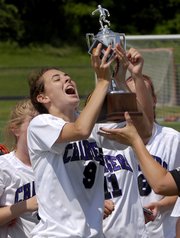 Blue skies brought out the best of both the Chantilly and Oakton High girls’ soccer teams during their suspended Northern Region championship game on Saturday afternoon.

The title match, ultimately won by Chantilly, 1-0, began in miserable, rainy conditions on Fairfax High’s synthetic turf field on Friday afternoon. But the game eventually was stopped due to lightening with just less than two minutes remaining in the first half of a scoreless game. Eventually, it was decided the game would be completed the following day at Vienna’s Madison High.

In Friday’s first day of action in the rain, both teams seemed to be battling the elements as well as competing against one another. The result was a championship game with uneven flow and two teams simply trying to make it to the halftime.

Saturday was such a different story. There was a renewed, brisker step from players on both teams as the finals game continued in beautiful, sunny weather.

“Last night, it was insane,” said Oakton coach Brooke Alexander, of the title game’s first day of play. “[Play] was broken up, wet and the turf played real fast. I think [Chantilly] coach [Melissa] Bibbee and I were tentative, worried about injuries.”

Both squads played their hearts out on Saturday. The game’s final two minutes of the first half were completed. Then, following a shortened five minute halftime, both squads went all out in the second half to determine a champion.

&lt;b&gt;IN THE END,&lt;/b&gt; it was Chantilly, behind an early second-half goal from senior forward Kristen Melchiori that captured the region crown by defeating a tough and talented Oakton team. The region championship was the first in the history of Chantilly’s girls’ program.

Both Concorde District teams, by reaching the region finals, assured themselves of a seeding for this upcoming week’s state AAA tournament. Chantilly (17-2-1) is scheduled to host Atlee High (Mechanicsville), a Central Region team, on Tuesday. Oakton (14-4) was preparing for a Tuesday trip to Richmond to take on home team Mills Godwin, also a member of the Central Region.

Chantilly’s region title victory on Saturday marked the third time in three meetings that the Chargers have defeated Oakton this season. Earlier in the postseason, Chantilly had beaten the Cougars, 2-1, in a district tournament semifinals game. Chantilly went on to win the district title with a finals win over perennial power Robinson.

Bibbee, the Chantilly coach, said her team was able to grab the early momentum against Oakton in day two of the suspended region finals game. The Chargers, with 1 minute, 59 seconds showing on the first-half clock when play resumed, opened the action with a free kick off the foot of sophomore defender Madyson Brown. Chantilly eventually earned a corner and finished the half strong.

“The last two minutes [of the first half], we kind of set the tone,” said Bibbee. “The free kick got us into the [Oakton] box.”

The Chargers carried that energy into the second half, putting offensive pressure on the Cougars right from the get-go. Then, just like that, Chantilly struck when Melchiori, a seasoned player who is at her best in the biggest games, gained possession of the ball off the left side of the goal area, the result of a forward pass from freshmen midfielder Olivia Colella. With Oakton defenders around her, Melchiori turned and sent a low, crossing shot into the right side of the net.

Oakton goalie Erica Stein made a valiant diving attempt for the ball, but it found its way into the net. Chantilly, with 36:43 remaining in the game, held a 1-0 advantage.

“I got a nice feed from Olivia,” said Melchiori, who has scored five goals this postseason. “I just turned on it and hit it into the goal. I felt a defender [near me].

“I was so excited. We’ve never been in a [region] championship. I’m real proud of my team.”

“Kristen, as a senior, has always been able to capitalize for us at the end of games,” said the coach. “I knew [a score] would come from someone like Kristen. She’s our second leading scorer.”

And it was Colella who helped set up the score.

“Olivia has been just as consistent as they come all season,” said Bibbee. “She’s very steady and has great ball skills.”

&lt;b&gt;LOTS OF TIME&lt;/b&gt; remained following Melchiori’s goal, and Oakton put together a several flurries of offensive pressure, but could not get a shot past Chargers’ net-minder Lauren Jancuska.

“I know our defense is pretty good,” said Brown, a top defender for the Chargers. “I love playing against Oakton. They’re great competition, and they push us to do better.”

“We are well-matched teams,” said Alexander. “Today, Chantilly finished [on the score by Melchiori]. That’s what it takes. We couldn’t seem to penetrate and get things going [on offense].”

All in all, it was a crazy two days of championship soccer. The two teams made the best of the poor weather on Friday and shined with stellar play on Saturday.

“I was a little nervous about it,” said Bibbee, of the game going into a second day. “We tend to get a little lackadaisical sometimes when there is a little layover.”

Brown said the Chargers were determined to come out strong on Saturday.

“We’re really excited about having a home game and having lots of our fans,” said Melchiori.

For Oakton, no players were named to the first or second Teams. Honorable mention selections for the Cougars were freshmen forward Alex Meyers and senior midfielder Christy Hassell.