McCants Goes from Worst to First

'One of the slowest' as a freshman, West Potomac senior wows at regionals. 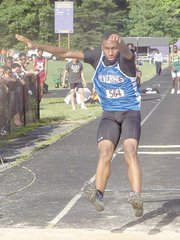 West Potomac senior Jon McCants finished a disappointing 13th in the triple jump at the Northern Region Championships last Friday, but used that poor performance to propel him to three first-place finishes later in the evening. 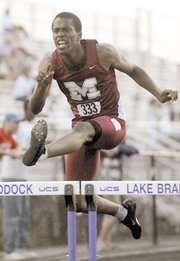 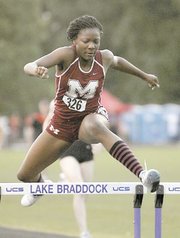 Sophomore Amira Hill won both girls’ hurdles races (110-meter and 300-meter), cementing Mount Vernon as having the best hurdlers in the Northern Region. 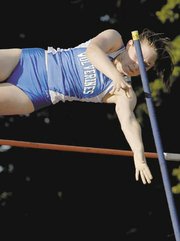 As West Potomac senior Chris Montgomery watched teammate and fellow senior Jon McCants, the anchor leg of his 4x400-meter relay team, cruise across the finish line for his third first-place medal at last week’s Northern Region Outdoor Track and Field Championships, he couldn’t help but laugh when the thought of McCants’s early forays into running came up.

“The funny thing is that his freshman year he was one of the slowest,” said Montgomery, who also came in third place in the 400-meter dash, one of the races McCants won. “Now I try to keep up with him, but he just pushes it into another gear.”

Montgomery, though, shouldn’t be ashamed that he’s in McCants’s rearview mirror these days. Just about everyone else in the Northern Region is in the same boat.

McCants nearly stole the show at the regional meet, held at Lake Braddock last Thursday and Friday, winning the 200- and 400-meter dashes on top of his strong anchor leg in the 4x400, therefore cementing himself as a dark horse heading into next weekend’s state championships in Newport News, Va.

McCants led the Wolverine boys’ team to a second-place finish in the team competition, behind just South Lakes, who featured the only male athlete comparable to McCants in this area, senior Vincent Brown.

“I just know all the hard work I put in paid off,” said McCants, who could have medaled in four events had he not had a disappointing showing in the triple jump. “All the pain is worth it because when you get three gold medals, it just feels great.”

&lt;b&gt;IT WASN’T ALWAYS&lt;/b&gt; golden for McCants, though. He began running competitively as a tall, lanky, and shy freshman. His form was awful, he wasn’t all that fast, and got lost in the shuffle thanks to a combination of those factors.

But beneath that reserved demeanor was a highly motivated individual waiting to be unleashed. When his times began improving his sophomore season, it spurred McCants to work even harder. As a junior at the Northern Region outdoor meet, he took third in the 400-meter dash and helped West Potomac to another 4x400-meter relay victory. But it wasn’t enough. McCants wanted to be mentioned among the elite.

“A lot of kids who are fast like him just settle,” said sprint coach Andrew DeCoster. “But every practice while other kids slink off to the bathroom, he just goes out and runs. By working hard, he has found … something he can get better and better at.”

But what sets McCants apart from the average hard worker is his sheer competitive instinct. West Potomac coaches marvel at how McCants just hits another gear when someone approaches him in a race. Earlier this season at the prestigious Penn Relays, he anchored the Wolverines’ 4x400-meter relay team that finished with the fastest recorded time in all of Virginia.

Described as “quiet” by friends and coaches, McCants “just hates losing.” So what about that poor showing in the triple jump last week? Well, DeCoster thinks it was the main reason his star runner blew away the competition in his other three races.

“He’s a lot of talent and a lot of just competitive drive,” said DeCoster. “He’s really quiet, but if you know him well, you can see it in his face. So that triple jump just fired him up extra for the other races.”

&lt;b&gt;AS A RESULT&lt;/b&gt;, McCants is starting to pick up some serious interest from colleges. His plan is to walk on to the Virginia Tech track and field team next fall, but a strong showing this weekend at the state meet could ratchet up interest from other schools with scholarships available.

Still, even with all the accolades coming his way of late, McCants can’t help but marvel at how far he has come.

“If you had seen me freshman year,” McCants said as he waited to collect his third gold medal. “you wouldn’t believe that I would be here now.”