Finally, a Meet to Call Their Own
Votes

Finally, a Meet to Call Their Own 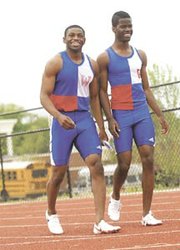 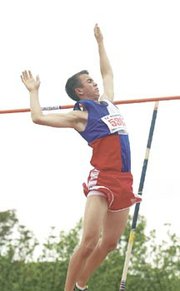 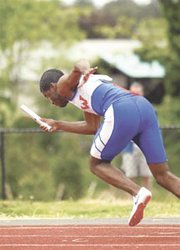 T.C. Williams senior Rushane Wilson prepares take off during his leg of the 4x100-meter relay.

The scene at Alexandria’s other big track meet this past weekend, the Draper Invitational hosted by St. Stephen’s/St. Agnes.

T.C. Williams senior Tynita Butts has done just about everything a high school track and field athlete can accomplish during her four-year career. She’s won multiple events at the Penn Relays, taken the state championships by storm in both indoor and outdoor track, and even captured national championships in the long and high jumps.

The one thing missing from her resume — until this past weekend — a first-place finish at a Titan home meet. But weeks before her graduation Butts finally has the missing piece to complete her stellar career, winning the high jump and long jump at the 27th annual T.C. Williams Invitational, the first track meet held at the school in four years.

“It’s very special,” said Butts. “I think it might be a little overwhelming, I’ve never seen this many people here. I’ve never seen it look as pretty as this, and it’s kind of like whoahh.”

Although the weather alternated between drizzle and gloomy, nothing could dampen the mood of those involved with the T.C. Williams track and field program. While the school and track were under renovation the past four seasons, the annual event was held at nearby West Potomac, but having the T.C. Williams Invitational — which this year featured 44 teams and close to 800 participants — just isn’t the same when it’s not being held in Alexandria, for obvious reasons.

“I think it means a lot to these kids, that they finally have something to call their own,” said assistant coach Patrick Deville. “For the staff, it’s just nice to be able to put on a meet and hopefully it lives up to what it used to be. It used to be one of the best meets on the Eastern seaboard and we want to be right back up there in a couple of years. It’s a privilege to be back here, this is one of the best facilities you can have here.”

&lt;b&gt;THE HIGHLIGHT&lt;/b&gt; of the day were two steeplechase races, a rarity in this area since most facilities aren’t equipped with the proper layout and equipment to pull off an event that involves horse-style jumps and water pits. T.C. Williams freshman Nicholas Ahuda won the 2000-meter high school boys’ race, and there was also a 3000-meter exhibition featuring pro runners Kristin Anderson, Lesley Higgins, Jacqueline Concaugh, Delilah DiCrescenzo and Shauneen Garrahanlrene.

But Ahuda wasn’t alone atop the podium Saturday. The T.C. athletes let it be known early and often that they meant business in what was the first home meet for just about everyone on the team. Both the boys’ and girls’ finished in second place overall and first among Virginia schools at the meet.

Leading the charge on the boys’ side was the Titans’ first-place 4x100-meter relay team featuring seniors Rushane Wilson and Reward Asonye and juniors Cortez Taylor and Ayodesi Coker. Taylor and Wilson also took second and third, respectively, in the 100-meter dash.

“I hope I don’t have to wait this long to finish first at home ever again,” said a smiling Taylor.

In the field, junior Thomas Caine took first place in the pole vault with a jump of 11 feet, six inches, while senior Pierre Espinoza finished in second place in the shot put.

Asonye was also a part of the Titans 4x400-meter relay that finished in second place, just a week after taking third place at the prestigious Penn Relays. He was joined by Yassir Hussein, Rashed Conteh and Malcolm Cameron.

On the girls’ side, Butts wasn’t the only star to shine bright on the Titans’ grand homecoming. The girls’ 4x800-meter relay team, featuring seniors Erika Weidman and Sarah Bryan, junior Shenandoah Raycroft, and sophomore Katherine Snow finished in first place by a 14-second margin. Bryan also came in first place in the 1600-meter run. In addition Hannah Wuerker and Lily Noguchi came in third and fourth, respectively in the pole vault.

“It’s an invitational, but it doesn’t feel that way because we’re finally running at home,” said Raycroft.