The second graders erupt into screams as a surprise guest steps into the school cafeteria. 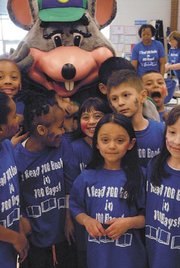 Chuck E Cheese poses for pictures with each of the second grade classes.

One hundred books were read in 100 days by nearly 100 second graders at the Hybla Valley Elementary School. The second graders were treated to a "Sock Hop" in the school cafeteria last Friday afternoon.

The tables and chairs were cleared, shoes were lined up against the wall and Matisha Jordan and John Ramos brought the children together in line dancing.

After dancing, cakes and juice were served up before a surprise special guest arrived. Chuck E Cheese was escorted into the room filled with screaming fans as the teachers and school administrators smiled and gently tried their crowd control techniques on the children. Chuck E gave high five’s and then posed for class pictures before the party was over and the 100th day of school ended.