Interest in mountain bike riding increases, as does Trips for Kids program’s influence. 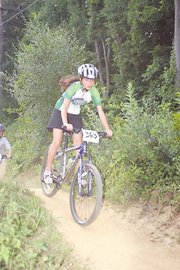 Photo courtesy of Trips for Kids

Laura Martinez will be a freshman at Lee this fall and hopes to play soccer there. For now, though, she’s enjoyed her time riding in the Northern Virginia Youth Mountain Bike Series.

Photo courtesy of Trips for Kids

The Northern Virginia Mountain Bike Series was started to get more children riding bicycles. Since its first season in 2007, the youth series has seen its numbers quadruple.

Cameron Mader of Burke has been one of several participants in the Northern Virginia Youth Mountain Biking Series, which was started in 2007.

Cameron Mader has days when he enjoys the solitude of a bike ride. Other times, he said, it’s fun to be able to have his mother, Anne Mader, ride along with him. No less than 100 percent of the time, Mader likes one thing the most when it comes to riding mountain bikes.

“I like to go fast,” said Cameron Mader, 7, who started pedaling at 18 months and has been riding mountain bikes since he was 4.

The Maders, who’ve owned The Bike Lane in Burke for eight years and recently opened a second store in Reston, are a bike-riding family. In addition to competitive rides throughout the week, Cameron Mader rides with his father, Todd Mader, every morning to Oak View Elementary School.

Cameron Mader has also been one of a growing number of participants in the Northern Virginia Youth Mountain Bike Series, which was started in 2007 as a joint effort between local mountain bike race promoters and advocacy groups to get more children riding bicycles. Last year, more than 100 local children took to the trails.

Because of the mountain biking series, which is comprised of multiple races that are sponsored by the Bike Lane, the Potomac Velo Club and EX2 Adventures, mountain biking has become a formidable option for youth sports, as the group’s level of participation has more than quadrupled since its inaugural year.

On Wednesday nights, participants take to the 3.6-mile course at Wakefield Park. In addition to a 10-and-under race, races of four separate classifications run every two years up to age 18.

“It seems like the kids really want to do it because they can’t just ride their bikes around the neighborhood anymore,” Anne Mader said. “Instead, biking has become a planned activity and people are looking for it to become a sport like soccer or basketball, because they’re going to plan for everything and they want to get into the competition part of it.”

&lt;b&gt;PAT CHILDERS&lt;/b&gt; jokes that Trips for Kids, a local nonprofit that has been linking under-privileged children with mountain biking for two years, is housed in Springfield. Childers laughs because the bikes are stored in a backyard trailer at his house … and in his basement, shed and under his deck.

Trips for Kids has 40 bicycles that it loans to eager riders so that they may experience the thrill of navigating a dirt trail.

“We’re trying to make it the Little League of mountain biking,” Childers said.

One TFK regular has been Laura Martinez, a rising freshman at Lee High School and an aspiring soccer player. Martinez hopes to make the girls’ soccer team at Lee and has enjoyed her time spent on a bike as a way to prepare for competition on the soccer pitch.

“In soccer, you run and exercise your legs,” Martinez said. “In bike riding, you do the same thing. It’s really interesting as a sport and you get to exercise a lot.”

Childers said that the group started with exclusively under-privileged children. Now, he and his wife, Julie Childers, have fielded several e-mails asking if it’s O.K. for middle- and upper-class families to participate, too.

“It shows that the interest is there,” Pat Childers said. “When Trips for Kids was started, we were providing opportunities for at-risk youth and kids that wouldn’t get out to nature. We started to find that kids in general weren’t getting out to nature.”

Pat Childers’ efforts have paid off. For the month of June, Liberty Mutual Insurance presented Childers with the Responsible Coaching Award, an honor for men and woman who emphasize sportsmanship and character-building in their approach to teaching children.

He’s one of 41 award-winners from across the country that were chosen out of more than 560 nominees. The award also included a $250 check for the organization.

“It’s a great opportunity to get kids together that wouldn’t normally get together,” Pat Childers said, “and they get a chance to spend some time with nature that they normally wouldn’t get.”