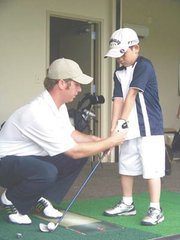 With a little help from instructor Joe Lussier, Jay Chang improved his golf swing last week during a week-long junior camp at the 1757 Golf Club off of Waxpool Road in Ashburn.

Hired in mid-May to become the 1757 Golf Club’s director of golf instruction, Adam Harrell has made learning a point of emphasis within the club’s summer camp program. 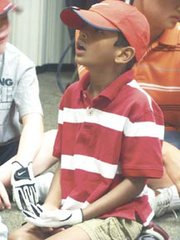 Haran Panchu looks on in amazement as last week’s campers at the 1757 Golf Club in Ashburn take turns pointing out 20 details of a specific hole.

A few minutes after nine o’clock on Friday morning, June 26, Adam Harrell walked outside of the pro shop at the 1757 Golf Club in Ashburn and asked a group of campers if they were excited. And if they were, he said, they should raise their hand. Everyone did.

That’s when Colin Chung, one of Harrell’s 12 campers for the day, reminded the 1757 Golf Club’s new director of instruction that it was only the first week of the first summer camp. That’s why he had never had a 100-percent showing of support before.

Harrell laughed, knowing Chung was partly right. He also wasn’t about to complain. Last week was the first week of summer camp for the 1757 Golf Club’s revamped junior program and, according to Harrell and several campers, everything was a success.

“It was better than I expected,” said 11-year-old Dorothy Dimitrew, who, along with her sister, Audrey Dimitrew, has been playing with the Loudoun Junior Golf Association this summer. “It’s not as serious as I thought it would be, but it’s been fun. I learned how to grip [the club] and how I should line up my shots.”

“I needed to learn golf, fix my grip and hit the ball farther,” said Peter Tan, 12, of Herndon. “I’ve been here for five days and now I can grip the club better and hit the ball harder. It was a good time and I learned a lot.”

The week-long junior summer camps will continue throughout the summer and wrap up on Friday, Aug. 21. Camps focus on fundamentals — full swing, woods, putting, chipping, rules and etiquette. The cost of a half-day camp (9 a.m.-noon) is $295 per camper for the week, while full day tuition runs $495. For more information about the junior golf camps, visit www.1757golfclub.com or contact Harrell at 703-444-0901.

&lt;b&gt;THAT THE CAMP&lt;/b&gt; was such a success surprised Harrell, who had a little more than three weeks to lay the groundwork for it. On the site of what was once called The Presidential before it filed for Chapter 7 bankruptcy last September, the 1757 Golf Club was purchased in mid-May by Billy Casper Golf.

While there are currently 10 playable holes on site, an 18-hole championship course designed by architect David Heatwole is slated for completion in the spring of 2010. And along with the course, a 16,000-square-foot clubhouse is also scheduled to open next spring.

In addition to a morning filled with a classroom session and driving range work, full-day campers will spend the entire afternoon on the course.

“We want to get the kids out, introduce them to the game and play as much golf as they can,” Harrell said. “So we always take them out on the course. And it is, unfortunately, a little rare.”

&lt;b&gt;STANDING NEXT&lt;/b&gt; to each other on Friday morning, Ashburn residents Dan and Jack Courtney could not look more opposite. Dan Courtney is 16. He’s 6-foot-6 and wears size 18 shoes. Jack Courtney, meanwhile, is 6 and likely has never seen the big and tall section of a department store.

But both Courtney brothers took part in last week’s activities as half-a-day campers. Jack Courtney, who also plays hockey, enjoyed improving his drive, while Dan Courtney wanted to shore up his all-around game -- enough to compete with his friends at Bishop O’Connell High School and so he can have a hobby for when he gets older.

“This is the first real-time golfing I’ve done,” said Dan Courtney, who also plays basketball for the Knights. “I really wanted to get into the sport because it’s something I can play when I’m old.”

Dan Courtney’s goal fits well with Harrell’s philosophy, which basically involves mixing safety, fun and instruction together. It’s all part of a plan that Harrell hopes can result in a much-improved instruction program at the 1757 Golf Club and maybe result in a few lifelong golfers.

“It’s safety first. Lots of fun second and then instruction,” Harrell said. “If we cover the first two bases and everyone’s having a good time, then we’re going to get into the grip, the set, chipping, pitching. “We want to introduce them to the game and hopefully have them become a golfer for life.”