Longtime volunteer Beth Bryan remembered with the start of the NVSL season. 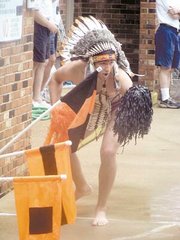 Orange Hunt’s Katie Moore receives some of the requisite eye back during the Sharks’ season-opening swim meet on Saturday, June 20 while Katie Ballou (pink cap) looks on.

Matt Weinberg can still remember the image. Last summer and for countless summers before it, a woman at Orange Hunt Swim and Racquet Club always wore a white, wide-brimmed cap and a blue jacket. She didn’t stand still much, wasn’t all that quiet and never missed a meet. Hardly anyone was more enthusiastic or helpful. Whether it was handing someone a dry towel or cooking dinner for a team member, Beth Bryan didn’t hesitate to lend a hand.

But this season has been a little different. After a hard-fought battle with melanoma, Bryan succumbed to the disease on April 17 of this year, ending her lifetime of service with Orange Hunt Swim Club.

While Weinberg, 19, is too old to swim for Orange Hunt, he was there on Saturday, June 20, leading every cheer with a voice that was mostly shot by 9:15 a.m. But still, he couldn’t miss this one. Orange Hunt made the decision to honor Bryan by dedicating this summer swim season to her, and Saturday was the team’s first opportunity to do so.

“She was willing to yell. She was willing to lose her voice,” Weinberg said. “It’s just really hard to see her go. She really was a presence on this pool deck. She poured her heart and soul out, and she was so genuine.”

Weinberg graduated from West Springfield High School in 2008 and now attends Boise State University. But the school does not have a men’s swim team, so Weinberg enjoys trips like this to see Orange Hunt more than anything. Since he was 6, he’s been a Shark, a point buttressed by a blue Rubbermaid container filled with orange and black regalia that he’s accumulated over the years.

&lt;b&gt;THE NORTHERN&lt;/b&gt; Virginia Swim League affords local youngsters several opportunities that their high school swim teams do not. Some, for instance, may not be counted upon as leaders when swimming at the high school level. But on the neighborhood squad, 17-year-olds are often asked to look after swimmers that are less than half their age.

“I’ve been on the team since I was a lot younger, so I always cheer for the little kids,” said Caroline Gagarin, 16, a Lee High School student who swims for Springboard. “They’re important to the team.”

For one youngster at least, Thomas Ballou, 8, the weekly, early-morning affairs aren’t a problem, either.

Furthermore, while high school swim meets aren’t exactly easy on the ears, they often pale in comparison to those outdoor meets during the months of June and July. Swimming is mostly secondary, team cheers trump all and costumes are welcomed if not required.

When Weinberg was 6, he remembered a specific cheer called “Hail to the Chief.” Last Saturday, he made sure he was the one being hailed. With a giant feathered headdress, Weinberg led numerous cheers and even did a rain dance, although his efforts in that department went mostly unnoticed.

Around Orange Hunt, any mention of spirit brings with it some sort of reference to Bryan, who served as a team representative, a coach and even as a meet official. There was little that Bryan didn’t do and fewer lives that she didn’t affect.

“Her presence on the pool deck is something we all came to know and love,” said current co-team representative Tracy Fortman. “The unbridled enthusiasm, the selflessness with her time, the beautiful smile and bright eyes and the love for every child and every parent. … Her spirit lives on in all of us.”