Honest Abe Gets Into the Act
Votes

Honest Abe Gets Into the Act

What if Lincoln wrote a congressman’s speeches? 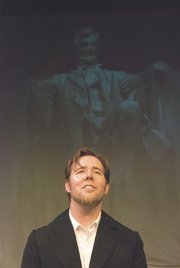 Peter Finnegan gives a memorable performance as a psychiatric outpatient who begins to believe he’s Abraham Lincoln in the Keegan Theatre’s area premiere of John Strand’s interesting new play "Lincolnesque," which is playing at the Theatre on the Run on South Four Mile Run Drive through June 28.

FINNEGAN’S CHARACTER is the brother of a Capitol Hill speechwriter who faces probable unemployment due to the poor performance of his boss in the polls. Michael Innocenti plays that brother who is having great difficulty coping with problems in all three aspects of his life: his profession, his family and his practically non-existent love life. Innocenti projects the increasing desperation of the character with a fine mixture of drama and humor in this comedy that raises serious issues.

"Lincolnesque" deals with those issues while it raises greater questions about how the modern body politic might respond to the generous spirit and resolute adherence to principle that history tells us marked the presidency of Mr. Lincoln.

What happens when the speechwriter lifts material from Lincoln? Well, for one thing, the congressman’s standing in the polls goes up and so does the complexity of the speechwriter’s life.

Lincoln was arguably the most eloquent of our former Presidents. John Strand’s script samples some of his better known lines including the incredibly precise "As I would not be a slave, so I would not be a master," and the immortal final words of his second inaugural, "With malice toward none, with charity for all, with firmness in the right as God gives us to see the right, let us strive on to finish the work we are in, to bind up the nation's wounds, to care for him who shall have borne the battle and for his widow and his orphan, to do all which may achieve and cherish a just and lasting peace among ourselves and with all nations."

Strand has the characters struggle to understand some of these words. He even includes a scene in which they seem incapable of comprehending the simple "The dogmas of the quiet past are inadequate to the stormy present." ("What the heck is a dogma?" they ask.)

But they struggle more with their personal problems than with the bigger issues of the nation. The speechwriter has to cope with a hard-charging chief of staff, played by Susan Marie Rhea with a hard exterior but more than a hint of insecurity. After the speech writer delivers one speech lifting points from his brother’s ramblings as Lincoln, she wants more of the same and isn’t above taking him to bed to increase the chances of getting it. Imagine her disappointment when she finds out just where the Lincolnisms are coming from. ("I slept with the wrong brother," she exclaims.)

ADDED TO THIS TRIO of Finnegan, Innocenti and Rhea are two characters portrayed by the same actor, the versatile Stan Shulman. At times he’s a homeless man that "Lincoln" mistakes as "his secretary of war" Edwin Stanton, and at others he is a wealthy kingmaker enchanted by the views of this modern-day "Great Emancipator."

Strand, who has many credits local theatergoers will recognize, including "Otabenga," "The Diaries," "Lorenzaccio" and the book for the musical "The Highest Yellow," which premiered at Signature Theatre, structures this two-act comedy/drama solidly so the plot is clearly delivered and the philosophical ruminations don’t interrupt the flow. That leaves you free to enjoy the show as it plays out and then you can go out for coffee and discuss what you think would happen if the spirit of Lincoln operated in contemporary affairs.