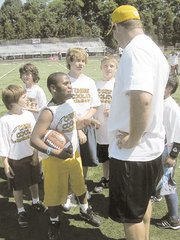 Cooley participated in several Q&A sessions with campers, using his own experiences as a 150-pound high school sophomore who didn’t start for his varsity team until senior year to relate to the 275 campers in attendance.

Cooley shows several campers the proper technique for a receiver on the line of scrimmage.

It was a logical question for a group of high schoolers to ask, considering the position they were in, seated no more than 3 feet away from Washington Redskins tight end Chris Cooley on the turf field at Fairfax High School last weekend.

Had he ever been in awe of someone during his five-year NFL career? As his star struck campers awaited an answer, Cooley thought back to a 2007 matchup against the Green Bay Packers and star quarterback Brett Favre, when during warm ups, he couldn’t help but act like the youths sitting across from him.

“I brought out football cards for him to sign,” said Cooley with a smile on his face.

The Q&A session was all part of Cooley’s inaugural youth football camp for boys and girls ages 7 to 14, which took place over two days. Children learned and performed drills the professionals use, played seven-on-seven touch football games and, most importantly, got to pick the brain of Cooley, a Pro Bowler this past season.

What struck most of them was just how down-to-earth their famous camp counselor could be. Along with several Q&A periods, the tight end also wandered around camp, keeping a running dialogue with some campers and using his own background as motivation.

“I was surprised he didn’t start for his high school football team until his senior year,” said Eric Kumah, an 11-year-old from Dale City, Va.

“I didn’t know how he was exactly gonna be like,” said sophomore Austin Perryman of Fairfax High School. “You always hear about celebrities being mean, but he was really cool. Every time someone would ask him for something, he was like a normal, average person.”

In addition to eight hours of instruction over two days, campers also received an autographed camp photo with Cooley, a T-shirt and several other promotional prizes. Proceeds from the camp were split between the Chris Cooley Scholarship Fund and the Jason Taylor Foundation. The defensive end was supposed to host the camp, but organizers tabbed Cooley once Taylor was released by the Redskins.

“They’ve really looked at me as a coach more than being in awe of an NFL player,” said Cooley. “They’ve taken my advice, done everything I’ve asked them to do. It has been a lot of fun. Both days have been four hours, but it felt like 45 minutes. It has blown by, I loved it.”

But it was the small snippets into Cooley’s life as a pro football player that fascinated those in attendance. At different points in time, Cooley talked about how he didn’t focus on football until he went to Utah State, wrestling and playing baseball in the winter and spring instead.

He revealed that the Pittsburgh Steelers were the toughest team he faced this past season. They were so smart that “they confused us,” he said. Cooley even admitted that Redskins coach Jim Zorn guaranteed him seven touchdowns this season during a recent practice.

But even as he did his best to make his 6-foot-3, 260-pound frame smaller, there were still those like 11-year-old Jerry Carter of Chantilly. “I can’t believe how huge he is.”

Soon thereafter, though, Cooley began talking about his high school days once again. He had been a 150-pound “JV All-American” as a sophomore, a pro football career seemingly out of the question. Rather than go with the played out “work hard” approach, though, Cooley gave advice his own way.

“I was lucky, I started as a rookie in the NFL,” said Cooley. “Everybody knows the work hard message. You put in the time and you do things like this camp, I think it’s just a lot of fun.”