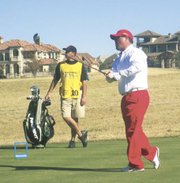 Although he’s been a professional golfer for 14 years, Springfield native and former Lee High School student Kris Blanks is a rookie on the PGA Tour. 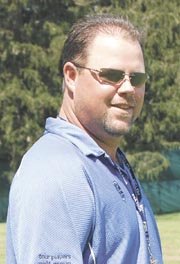 At the Nationwide’s Bank of America Open on June 1, 2008, Kris Blanks beat Tour veteran Bob May by one stroke to win the title. ‘Man this feels good,’ he said after the victory.

Addressing the media at the start of the 2009 PGA Tour, former Lee High School student and Springfield native Kris Blanks didn’t have to get real imaginative with his thoughts.

“I guess it’s one of the understatements of the year to say I’m excited,” Blanks said. “I’m just soaking up the enormity of being on the Tour.”

Five weeks later, the rookie responded to a question about how his first few tournaments had gone.

“You can’t print what I’d like to say,” Blanks said. “I’ve played terribly thus far, and I really have no idea why.”

Many newcomers to the Tour encounter giddy highs and gloomy lows, and Blanks has certainly suffered through his share this season. He missed the cut in six of his first seven starts, but then tied for 17th in the Valero Texas Open in mid-May. He tied for 39th at the next event, the HP Byron Nelson, also in Texas, but missed the cut in this past week’s St. Jude Classic in Memphis.

Throughout, the 36-year-old father of two has maintained his low-key demeanor. He feels blessed to have made it to the big dance after years of club pro jobs and grinding on the mini tours. His career path is less like that of Tiger Woods and more like that of late-bloomer Tom Lehman, a 30-something who finally stuck on the PGA Tour in 1992. Blanks has worked hard on his game for years without the help of a sponsor.

&lt;b&gt;AS HIS&lt;/b&gt; father pursued an Air Force career, one assignment took the family to the Washington, D.C. area in 1987. They lived in Springfield near Rolling Road and Blanks attended Lee High School. Both the elder Blanks and his teenage son worked part time at Springfield Golf and Country Club with dad as a starter and son in the bag room. Long-time head pro Quinn Sullivan remembers what Blanks was like when he was younger.

“He was a nice young man,” said Sullivan. “He had lots of enthusiasm and loved golf. He woke up every day with a club in his hand.”

Blanks honed his game at Springfield to the point where he won the boys’ 14-15 division in the 1988 Bobby Gorin Memorial, which is one of the area’s top junior tournaments. In 1989, Blanks lost in the semifinals at Springfield’s own Bobby Bowers Memorial.

The family soon moved to Montgomery, Ala., where Kris Blanks would later finish high school. At Montgomery’s Huntingdon College, he earned NAIA All-American honors on the golf team. Before turning pro in 1995, Blanks briefly returned to Fairfax County and won the 1994 Northern Virginia Amateur.

Blanks met his wife-to-be, Tami Dougan, when they both played on Florida mini tours. She had played No. 1 at Ohio State, tried the LPGA Futures Tour and finally settled in as PGA club pro. They married in 1996, and the two continue to have spirited money games on the golf course.

“I’m proud that I’ve only lost nine times to her in face-to-face matches,” he said.

Both worked as assistant PGA professionals at Myrtle Beach’s Wild Wing Plantation through 2002. They then moved to Savannah, Ga., with Kris Blanks at The Landings Club and Tami Blanks at nearby Sea Pines in Hilton Head. After a few successes in local PGA events, Kris Blanks qualified for a Hooters Tour event in 2002 and won it. From that year until 2006, he bounced between the Hooters and Nationwide Tours. Kris Blanks won twice in 2006 on the Hooters Tour and finished second on the money list.

&lt;b&gt;BLANKS GAINED&lt;/b&gt; a spot as a Monday qualifier in the 2007 Melwood Prince George’s County Open, the Washington area’s Nationwide tournament. His birdie on the 72nd hole gained him both a tied-for-25th finish and an automatic entry into the following week’s event. He played well during the remainder of the year and his tied-for-33rd finish at the 2007 PGA Tour Q School got him fully exempt status on the 2008 Nationwide Tour.

Every aspiring professional golfer dreams of the breakthrough tournament, a win that guarantees a ride on the lavishly funded traveling circus and entertainment bonanza called the PGA Tour.

Kris Blanks had his signature moment on June 1, 2008 at the Nationwide’s Bank of America Open in Chicago. He won it, beating Tour veteran Bob May by one stroke.

“Man this feels good,” he said afterward. His winnings boosted him to a year-end finish of 13th on the Nationwide money list, high enough to gain the coveted spot on the 2009 PGA Tour.

Kris Blanks, whose mother named him after entertainer Kris Kristofferson, lives with his wife and their two young sons in Frederick, Md. They moved north to be closer to Kris Blanks’ parents, but are considering seeking a home in the Dallas-Fort Worth area so he can practice more in the winter.

Kris Blanks expects to get about 10 more starts through the season’s end and hopes for another breakthrough.

“I have been struggling,” he said after his first round at Memphis. “It’s frustrating, but I am going to keep trying.”