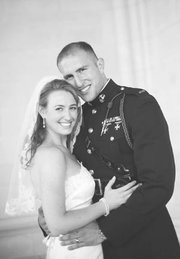 Mr. and Mrs. C.O. North of Potomac are pleased to announce the marriage of their daughter, Hilary Anne, to Lt. John Carl Scheler (USMC), the son of Dr. and Mrs. Carl Scheler of Murrysville, Pa. The couple were married on April 25, 2009 at the Washington National Cathedral. Hilary is a graduate of the National Cathedral School, The University of Pennsylvania, and is currently a Ph.D. candidate in Neuroscience at Georgetown University. John, a graduate of Northwestern University, is a ground intelligence officer in the United States Marine Corps. He has recently returned from a tour in Iraq and is now stationed at Camp Pendelton, Calif.