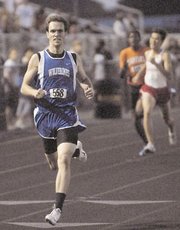 All four runners — Brandon Comfort, Chris Montgomery, Joe Bradley, and Jon McCants — were seniors in one of their last high school races. Not to mention the Wolverines were the defending champions in the race, having won it a year ago at the 2008 state championships. If that weren’t enough, they were also the talk of the competition thanks to the 3:15.27 time the quartet laid down at the prestigious Penn Relays back in April — the fastest recorded time in Virginia for the 4x400 this year.

None of that concerned West Potomac coach Don Beeby, though. With senior prom just a few short hours away, he was more worried about what his four athletes were thinking about. Was it dinner and dancing or a second-consecutive title that raced through their bodies?

“My fear was they would race faster to the car than on the track,” said Beeby.

Little did the coach know, his four seniors could do both. After racing to first place in the 4x400-meter relay with a time of 3:18.52 in the afternoon, giving the Wolverines their lone state title of the day, Beeby and his star pupils made it back to Northern Virginia right in time for the 8 p.m. dance.

It capped off a memorable season for the relay team, which took fourth in the country at the Penn Relays and won the race at districts, regionals, and now the state meet.

“It was a lot of pressure, but I tried to put that aside,” said Montgomery. “I was kind of nervous because it’s the state meet and you never know. We just didn’t worry about getting first, we just wanted to go out there and run fast.”

&lt;b&gt;BUT THIS RELAY&lt;/b&gt; wasn’t some juggernaut from the beginning. Take Montgomery for instance. A football player in the fall, he had never participated in outdoor track during the spring season, instead choosing lacrosse his first three years at West Potomac.

But after a strong winter season of indoor track, Montgomery stuck around for the spring campaign much to the coaching staff’s surprise. His speed landed him on the vaunted 4x400 team.

Those quick feet also played a role in saving the Wolverines during the beginning parts of their race last Saturday. After Comfort’s opening leg, West Potomac sat in fourth place, but during the final straightaway of Montgomery’s second leg, the Wolverines jumped up to the lead pack, directly behind first-place Western Branch.

After Bradley maintained that position the entire third leg, star Jon McCants took it from there, bypassing Western Branch almost as quickly as he received the baton for the final leg, and taking home another first-place medal in a race that has become the school’s forte.

“I got to witness a lot of talent,” said Montgomery. “I wish I had done [track] all four years.”

McCants and Bradley were a big reason the West Potomac boys’ took seventh in the state as a team. McCants finished in fifth place in the 400-meter dash and sixth in the 200-meter dash, while Bradley was an impressive fourth place in the 800-meter run. Bradley had held himself out of the 4x400-meter relay at the Northern Region meet due to a minor injury.

On the girls’ side, senior Meghan Connor took 11th in the pole vault competition and freshman Sarah Jane Underwood came in ninth place in the 800-meter run.

&lt;b&gt;FOR MOUNT VERNON&lt;/b&gt;, the state meet was a bit of a letdown after a promising regional showing. Star hurdlers Amira Hill and Clive Cameron both placed in the top-15 in their respective specialty races, but finished lower than expected.

Cameron took 14th place in the 300-meter hurdles, running nearly three seconds slower than he did at the Northern Region championships, while Hill posted a blazing sub-15 second time in the preliminaries of the 100-meter hurdles, but couldn’t match it in the final heat to place seventh. Senior Candace Bailey also took 10th place in the girls’ discus competition.

But on a day that began at a track meet, it was the four seniors from West Potomac who got to celebrate its end in style at their prom, repeat champions despite having a target squarely on their backs.

“This time around, we had that early season time, so everybody was gunning for us,” said Beeby. “I’m sure there were people in the stands halfway through who thought we weren’t that fast, but every single final straightaway we picked people off. I was really pleased with the overall follow through of this group.”