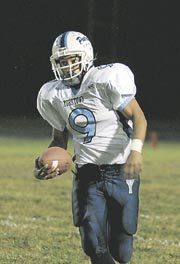 Yorktown’s Kyle Toulouse was a star for the Patriots football, basketball, and baseball teams this season and was honored as the Better Sports Club of Arlington’s male high school athlete of the year as a result.

The Better Sports Club of Arlington held its annual end-of-the-year awards banquet last week and numerous local sports contributors were honored in conjunction with the event. The highest award of the night, the Sportsman of the Year, went to longtime Arlington Soccer Association (ASA) Executive Director Mac McLaughlin. McLaughlin was hired as executive director of ASA in 1973.

It was announced last week that after two successful seasons, Yorktown girls’ basketball coach Kim Cordell will be moving to Uganda with her husband. The school is now accepting applications for the vacant position of head varsity girls’ basketball coach. Those interested should fax resumes to Mike Krulfeld at 703-228-5409 or email at mkrulfel@arlington.k12.va.us