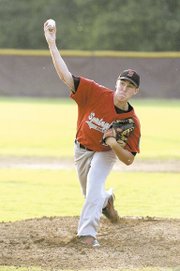 On Wednesday night, July 22, Post 176 starting pitcher Brennan Miller laid in bed all night, trying to get some rest before he took the mound against Arlington Post 139 the following night in the American Legion District 17 championship at Oakton High School.

He didn’t fall asleep until around 5 a.m. and then had to spend a restless Thursday waiting for his first pitch. However, Miller would spend an additional sleepless night after evening thunderstorms pushed the contest to Friday.

“I can’t sleep when I know I have to pitch,” said Miller. “Two nights of that is just hard.”

But when Miller finally did take the mound Friday night, the staff ace for Post 176 and South County Secondary School this past spring seemed no worse for the wear. His 128-pitch, complete game performance in Post 176’s 12-6 win included just three earned runs, nine strikeouts, and whole slew of breaking balls.

However, the double elimination format of the District 17 tournament meant a playback game was in order since Post 139 had gone undefeated in postseason play, which included a 10-0 thumping of Springfield in early round action. Arlington ended up winning the District 17 title with a 6-3 victory Sunday afternoon in another game delayed a day due to poor weather.

The lasting memory on the Springfield side would almost certainly be the pitching clinic put on by their ace. Miller knew coming in that Post 139 was deadly at the plate facing fastballs, having watched them pulverize the league’s pitching throughout the regular season. So Miller altered his own game plan and 80 percent of the pitches he threw Friday night were either curveballs or sliders. The strategy left the batting order of top-seeded Post 139 off balance and out of whack.

“I knew I had to throw off-speed stuff all game,” said Miller. “In the second inning, I had two strikeouts and I thought, ‘This is my game, I have it.’”

The curveball strategy appeared to be working again Sunday in the championship finale. Starter Shannon Smith of West Springfield High School was solid through four innings, with Arlington holding a slim 2-1 lead. But a line drive off the bat of Post 139’s Tom Edwards in the fifth nailed Smith directly in the shin, forcing him out of the game. Post 139 would then tack on three more runs to give itself a four-run cushion.

“That hurt us because we had to quickly go to someone, which we weren’t prepared to do and that took us out of stride,” said manager Al Vaxmonsky, who has won seven district titles in his 20 years as coach of Post 176.

&lt;b&gt;THAT POST 176&lt;/b&gt; was even in the championship game was a surprise to some. Springfield barely qualified for the playoffs, earning the No. 6 seed after an up-and-down regular season. They defeated Post 129 of Alexandria in a first round play-in game on July 18 to advance to the double elimination portion of the playoffs.

Following that 10-0 loss to Arlington, Post 176 recovered to beat Vienna Post 180 behind another complete game showing, this time a 142-pitch outing from Sean Ruggles last Wednesday to make it into the championship series.

Kyle Snyder, Eddie Boddie, Taylor Kewer and John Ponton all had two RBIs during the championship series. Centerfielder Jeff Haeuptle was the team’s best hitter throughout the regular season, finishing with a .430 batting average.

“We had a great season,” said Vaxmonsky. “We started off a little slow … but we played our hearts out.”