Everything for Everybody
Votes

Book of historic Virginia photographs features dozens of images from across the commonwealth. 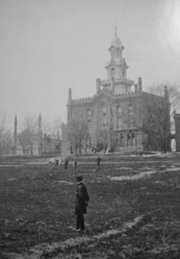 This 19th-century photograph of the Alexandria National Cemetery shows the footpaths that once meandered through the graveyard.

A 1911 photograph of shows child workers at a glass factory in Alexandria.

The silvery crisp image from Fluvanna County in 1912 is an unlikely place to find the heart of "Historic Photos of Virginia," issued recently by Turner Publishing. Yet there it is painted on the side of L.O. Hayden’s general store — an advertisement boasting "Everything for Everybody."

"If the proprietor could not be all things to all people," mused husband-and-wife authors Emily and John Salmon in the caption, "at least he had ‘Everything for Everybody.’"

Although the collection does not include an image from the interior of Hayden’s store, readers of the coffee-table book are taken on a tour through time and space with a collection of dozens of images featuring everything from square-dancing children in Roanoke to beach-going teenagers at Buckroe Beach.

Alexandria features prominently in the book, with images including the Jones Point lighthouse in disrepair, the Carlyle House as part of the old Mansion House Hotel and the now-demolished Alexandria Post Office and Custom House at the southwest corner of Prince and St. Aspah streets.

"With everything that’s going on with the economy right now, it’s really nice to look back and see how far we’ve come," said Liz Chenery, marketing associate with Tennessee-based Turner Publishing Company. "Looking back on these old photos is a great reminder that our ancestors made it through some really hard times, which is encouraging considering everything that’s going on right now."

"People think of Old Town, and they think of the seaport, shipping and the founding fathers," said Holtz in an interview last year. "They tend to forget that Alexandria went through some hard times."

Following on the success of several successful books focusing on specific cities such as Alexandria, "Historic Photos of Virginia" broadens the frame of reference to include every corner of the commonwealth — from modest frame houses in Virginia Beach to grand estates in Albemarle County. Some of the photos show the original context of buildings now surrounded by the rush of modern life, such as the haunting shot of Alexandria’s Episcopal Seminary during the clear-cut sparse landscape of the Civil War. Others show long-gone buildings, demolished in urban-renewal efforts or to make way for larger roads across the commonwealth. Together they show the sweep of history and hint at a world that is in many ways passing from view.

"We hope that ‘Historic Photos of Virginia’ will be a catalyst for preservation, that people will look at the images and captions, remember the places that are gone, and recognize the buildings that still stand and work to preserve them," said author Emily Salmon in a written statement about the book.