‘Washington & His Generals:’ History and War in Human Terms
Votes

‘Washington & His Generals:’ History and War in Human Terms

Getting to know those who bled for the birth of a nation. 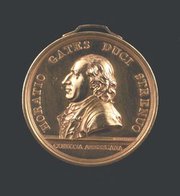 Comitia Americana medal, Horatio Gates at Saratoga, 1777, engraved by Nicolas-Marie Gatteaux, Paris, France, 1787. Gates was one of Washington's most controversial generals. His victory at Saratoga in October 1777 prompted some to suggest he should replace Washington as commander in chief. 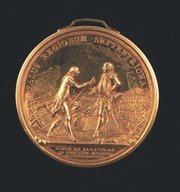 Congress awarded Horatio Gates this gold medal, designed by French engraver Nicolas-Marie Gatteaux and struck at the Royal Mint in Paris in 1787, for his stunning victory at Saratoga ten years earlier. 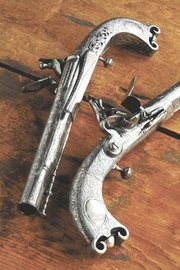 Courtesy of the Lexington Historical Society

Pitcairn Pistols made by John Murdoch, Doune, Scotland, mid-18th century. British major John Pitcairn lost these ornately decorated, all-metal pistols at Lexington on April 19, 1775, the first engagement of the Revolutionary War. One historical account claims a Minuteman presented them to American General Israel "Old Put" Putnam, who used them until he resigned from service.

Detail of inscription on the hilt of a French sword, ca. 1750-1770, recording its presentation to Lt. James Giles, 2nd Continental Artillery, by the Marquis de Lafayette on Sept. 9, 1780. Lafayette purchased swords and other military accoutrements for all the officers of the Continental Army’s Light Infantry under his command while in France securing additional aid for the Americans in 1779. Giles likely added the inscription in 1824, when he attended a reception for Lafayette given by the New Jersey branch of The Society of the Cincinnati. 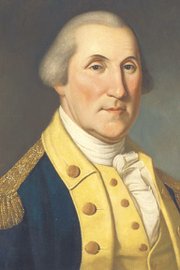 Courtesy of The Dietrich American Foundation

Attributed to Charles Peale Polk after Charles Wilson Peale, George Washington, ca. 1788-1790, oil on canvas. Portrait depicts George Washington as a self-assured general abounded both during and after the Revolution. 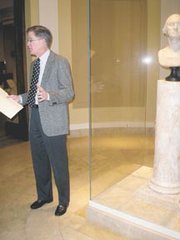 James C. Rees, executive director, Mount Vernon Estate & Gardens, explains how the new exhibit, "George Washington & His Generals," was assembled and why it is unusual for Mount Vernon. 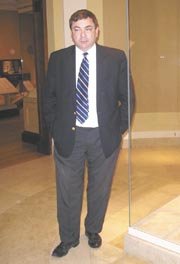 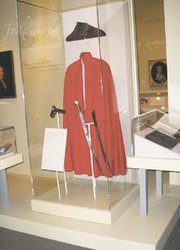 One of the main attractions of the new exhibit at Mount Vernon Estate & Gardens entitled "George Washington & His Generals," is the red cape and tricorn hat worn by General Artemus Ward. 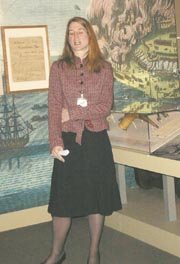 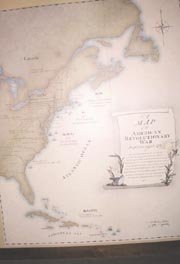 A portrait of General Washington graces a detailed explanation of Mount Vernon Estate's latest exhibit, "George Washington & His Generals" that introduces visitors to some of the Revolutionary War's primary players.

In a letter to the president of Congress, dated Sept. 24, 1776, General George Washington said, "There is nothing that gives a man consequence, and renders him fit for command, like a support that renders him independent of everybody but the State he serves."

That statement could well serve as the guiding principle of the new exhibit which opened Feb. 21 in the Donald W. Reynolds Museum at Mount Vernon Estate. Entitled "George Washington & His Generals," it focuses on the conduct of the American Revolutionary War through the style and perceptive leadership of its commander-in-chief and the general officers who served with him.

Co-sponsored by The Society of the Cincinnati, it contains more than 120 painting, prints, personal artifacts, and manuscripts associated with 17 of the 81 generals of the Continental and French armies that fought their way from New England to Yorktown against the British, the greatest military force of the 18th century.

In addition to Mount Vernon and The Society, the exhibit draws from nearly 40 of the nation's foremost fine arts museums, historical societies, and private collections. It offers an insight to the men and their personal strengths and weaknesses as much as to the conduct and battles of the war itself.

"This exhibit is very different for us at Mount Vernon. Our traditional focus has been on George Washington's home life and his plantation. This show concentrates on the action of the 18th century," said James C. Rees, executive director, Mount Vernon Estate & Gardens, in kicking off a press preview show Feb. 18. It will run through Jan. 10, 2010.

"That is why we have joined with The Society of the Cincinnati. We hope to expose many of the personalities of those generals and how Washington dealt with that mix through this exhibit," Rees said.

"We talk about our revolution more than any other people in the world talk about their revolution, if they have had one. But, we tend to focus on the philosophy and rationale behind it rather than the battles and the men who commanded those battles," said Jack Duane Warren, Jr., executive director, The Society of the Cincinnati, based in Washington, D.C.

"We tend to lose sight of the fact that the Revolutionary War was made up of people who were prepared to give their lives for the cause. And, many of them did," he said.

"No American war since has produced such a diverse group of general officers. Our Revolutionary War, in many ways, is a great romantic drama where the soldiers’ lives are reflected through their deeds," Warren said.

"Many of Washington's generals had far more military experience than he did. And, in some cases, at the beginning, they resented him being commander-in-chief," he said.

"Washington's strength and brilliance was that he learned from his mistakes and he built a hard core of leaders around him that he trusted. By the end of the war, in his farewell address, he referred to them as his Band of Brothers," Warren said.

THE EXHIBIT presents a comprehensive and realistic look into the trials and tribulations of the war as well as its ultimate success in the final major battle at Yorktown. It also highlights the so-called southern campaign which commenced in 1779— the battles of the south that are not well known.

It also portrays many of Washington's frustrations and exasperation with some of his generals and command officers, highlighted by the betrayal of Gen. Benedict Arnold, a Washington favorite until his treason, and the failure of Gen. Charles Lee at the Battle of Monmouth Court House, which led to the end of his military career. The latter is portrayed in the exhibit's largest and most striking painting done in 1857 by American artist Emanuel Leutze.

Those frustrations were often conveyed to others through Washington's letters, which he penned, on average, four a day throughout the eight years of battle. One statement, captured in the exhibit, illustrates his concern. "I am now embroiled on a tempestuous ocean from which perhaps no friendly harbor is to be found," Washington wrote in June 1775 as he attempted to create a citizen army and met many of his generals for the first time in Cambridge, Mass.

The exhibit is divided into nine categories emphasizing different phases of the war and the generals who played significant roles in each phase. As visitors enter the exhibit they are greeted by a large display highlighted by a portrait of Washington and explaining his leadership challenge upon receiving his commission as commander-in-chief on June 15,1775.

Moving clockwise, visitors are introduced to exhibits under the headings of First Generals, Martyred Heroes, Trusted Lieutenants, Critics, Rivals and a Betrayer, Foreign Volunteers, Rising Leaders, The Grand Alliance, and, finally, Republican Heroes. In each case the theme is captured through artifacts, writings, paintings and the spirit of the moment.

By learning about the men as ordinary mortals and products of their time, both before, during and after the war, the visitor gains an insight to the American Revolution that takes it out of the text book and into the flesh, blood and emotions of battle weary citizen soldiers and professional military strategists. The ultimate humanization of their victory culminates in the formation of The Society of the Cincinnati — the "Band of Brothers" after the blood of battle.

At its conclusion, the exhibit comes down to two entities — one of tangible beauty and symbolic meaning and the other that captures the emotion of those that have faced common death for a cause and have exited that crucible forever linked in spirit and purpose. One is the Diamond Eagle of The Society and the other is the painting of Washington bidding farewell to his generals, which catches both their overwhelming emotions and their strengths.

The Diamond Eagle, originally drawn by Pierre Charles L'Enfant and created by Duval and Francastel of Paris, became the insignia of The Society. It bears the image of Cincinnatus, the Roman citizen soldier who refused to become a dictator after leading his armies to victory, on both sides and is suspended from a blue and white ribbon — the colors "descriptive of the union of France and America" in the war against the British.

The painting, "Washington's Farewell to His Officers" by Alonzo Chappell in 1857, puts on canvas Benjamin Tallmadge's account of that Dec. 4, 1783 event at Fraunces Tavern in New York City. It captures the emotion of Washington and his officers, especially that of Gen. Henry Knox, his artillery commander who had been with him before and throughout the war.

These men came from all 13 colonies and 10 foreign nations. They represented over a dozen professions, ranging from Quaker ironmaster Nathaniel Greene, to New York patrician Philip Schuyler, to Polish military engineer Tadeusz Kosciuzko.

This exhibit puts into visual perspective and mental appreciation Washington's statement after the Battle of Yorktown when he proclaimed of his generals: "There is no danger which they will not cheerfully encounter — no difficulty which they will not bravely overcome."