Spartan Boys Run Their Way to the Dulles Title
Votes

Spartan Boys Run Their Way to the Dulles Title 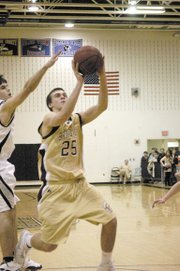 Kevin McGaughey ran the floor well and, in the Spartans’ half court game, went to the basket hard. The junior finished with 20 points in his team’s victory over Dominion.

Broad Run, with the championship trophy, celebrates its tournament title following the triumph over Dominion. 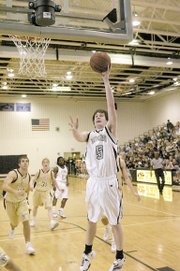 Dominion senior Aaron Good goes up for a layup during the Titans’ title game against Broad Run last Saturday night. 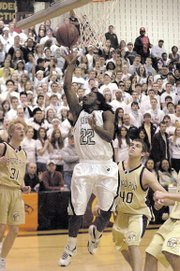 Deandre Albritton, scoring here on a tip-in basket, finished the championship game with 16 points for the Titans.

Broad Run, in its biggest boys basketball game of the season, put on a fast-break exhibition during the fourth quarter of its Dulles District tournament finals game against top-seeded Dominion last Saturday night. The result was a thrilling display of ball movement and team work that propelled the Spartans to a 74-67 win. The postseason contest took place in front of a frenzied, large crowd at Freedom High School in South Riding.

This week, both Broad Run and Dominion were competing in separate Region II playoff tournaments. Dominion (19-6), the No. 2 seed in the six-team Division 3 field, received a first-round bye and was scheduled to play the winner of No. 3 Western Albemarle (Crozet) and No. 6 William Monroe (Stanardsville) in a semifinals game on Thursday night at Dominion. Tip off is set for 7 p.m.

Broad Run (20-5), meanwhile, was scheduled to compete in the six-team Division 4 tournament as the No. 2 seed. The Spartans received a first-round bye and were set to take on the winner of No. 3 Orange County and No. 6 Potomac Falls in a semifinals contest set for Thursday night at Broad Run. Tip off is set for 7 p.m.

Local team Park View was also competing in the Division 4 tournament as a No. 5 seed. The Patriots were set to meet Dulles District foe and No. 4-seed Loudoun County earlier this week on Tuesday, with the winner getting a date against top-seed Charlottesville High on Thursday night in Charlottesville.

&lt;b&gt;BOTH DOMINION&lt;/b&gt; and Broad Run gave strong showings for themselves in the exciting, fast-paced Dulles title game on Saturday. The top-seeded Titans, who won their first regular season district crown this winter, jumped out to a 20-13 lead after one quarter and maintained a 35-30 advantage at halftime. At one time, Dominion, midway through the second quarter, led by as many as 11 points.

Broad Run, the No. 2 seed, had tied the game by the end of three quarters before putting together a solid, textbook quarter of play over the final eight minutes to gain the win.

When the final buzzer went off, ecstatic Broad Run students flooded the floor in a spontaneous display of emotion and celebration. Broad Run senior center Will Field, a late-game hero in the victory, was even hoisted up and carried around for a few seconds by the frenzied student body.

"It feels great to come out with a win over Dominion," Field said later. "We came out and wanted the game and everyone gave it their all."

Broad Run, under first-year head coach John Costello, has talented frontcourt and backcourt players who move the ball well, both on the break and in the half-court game and play unselfishly. Those team characteristics came to the forefront throughout the game against Dominion, but especially in the fourth quarter.

Less than a minute into the fourth quarter, Spartan senior guard Breon Earl nailed a three-point shot from around the key to give Broad Run a 51-48 lead. A minute later, sophomore point guard Taylor Johnson scored on a rebound follow-up basket to make the score 53-48.

Moments later, after Dominion had gotten within 53-49, the Spartans began a stretch of vibrant, crisp play that resulted in several fast break layups with Field finishing. The sequence began with a half-court play in which fellow big man Kevin McGaughey penetrated the lane area and made a terrific pass to Field, who laid the ball up and in from close range to make it 55-49 Broad Run.

Following a basket by Dominion’s Deandre Reaves that got the Titans within 55-51, Field, running the floor like a guard, scored the game’s next three baskets off of fast breaks to all but put the game away. Earl, who quickly worked the ball up the floor, had assists on two of those baskets.

"They started pressing us," said McGaughey. "When you have team speed, you want them to press you."

During a timeout following one of Field’s baskets, the Broad Run big man was mobbed by overjoyed teammates around the Spartans’ bench. His final fast-break basket, in which he was fouled, came with three minutes, 44 seconds left to play. Field missed the ensuing free throw following the bucket, but the Spartans had, just like that, built a 61-51 lead.

"We have a really fast team and everyone looks to run the court and pass," said Field. "There are no unselfish guys. The guys saw me under the basket."

"Will finished on the break and Breon was getting it to him," said Costello, the Broad Run coach.

"We have the athletes to combat that," he said. "We knew we had to block out [on rebounds]. It was miscommunication and we weren’t getting back [defensively]. But Broad Run executed their fast break. You’ve got to give credit to them."

&lt;b&gt;THE NEVER-QUITTING&lt;/b&gt; Titans continued to play hard and cut the Spartans’ lead to 70-67 in the final minute of play on a 3-pointer by senior Greg Smucker. But Broad Run iced the game for good on a pair of free throws from both Johnson and senior Greg Snow.

Field finished the game with 12 points. He also dominated on the boards with 12 rebounds, helping the bigger Spartans outrebound their rivals, 38-20, on the night.

"Me and [fellow big man] Kevin [McGaughey] were telling each other to get every rebound," said Field. "We’re taller than those guys."

McGaughey, a junior, scored a team-high 20 points with five rebounds on the night. Other Spartans in double figures scoring were Johnson (14 points, eight rebounds), and Earl (11 points), who hurt the Titans with his penetrating dives to the basket as well as his passing and outside shooting.

Kevin Sandersen and Snow both scored five points in the Spartans’ balanced attack. Broad Run had a good night at the foul line, converting 18 free throws to three for Dominion. Eight of Johnson’s points came at the stripe.

The Titans’ top scorers were guards Reaves (23 points), a sophomore who converted three 3-pointers in the game and senior Albritton (16 points). Smucker, a shooting guard/forward, scored all of his 13 points in the second half, including three treys. Senior Mike Biller added six points.

Of Reaves’ game-high scoring night, Douglas said, "He shot the ball extremely well tonight. He can shoot the three, which expands other teams’ defense."

Smucker, a team captain, came to life offensively in the second half.

"He’s been shooting well for us the last two or three games," said Douglas. "He kind of took the team under his wing [in the second half] like a captain should.

&lt;b&gt;DOMINION&lt;/b&gt;, which defeated Freedom and Park View to reach its first district finals in the school’s six-year basketball history, came out shooting the ball red hot to start the game. The Titans played a good first half. Albritton ended both the first and second quarters with buzzer-beating baskets, the latter score coming on a rebound follow-up to give the Titans their five-point advantage at halftime.

"We gave them too many second-chance shots in the first half and they shot the ball really well," Costello said of Dominion.

McGaughey and the Spartans were relieved to be down by only five at the intermission.

"We just knew they couldn’t shoot like that the whole game," he said. "We tried to lock up [better] on defense [in the second half] and we kept working hard. On offense, we started hitting shots."

Douglas, the Dominion coach, said his team made several mistakes, both on offense and defense, throughout the game. But he was quite pleased with his team’s all-out effort in the finals.

"I told them [afterwards] ‘I’m real proud of what you did this year by winning the [regular season] district and getting into regionals,’" said Douglas. "I told them this was just one night. "We’re used to winning, so this does hurt," said Douglas, of the championship game loss. "There’s nothing wrong with that. It shows you’re a competitor."

"This was our first title game," said Douglas, whose team put together a nine-game win streak at one point during the regular season. "We’re finding out how to win. Last year was a building block. This year, the guys have gotten on a real run."