Highlanders earn another region playoff berth with district tourney win over the Seahawks. 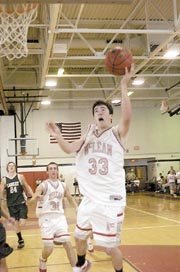 Sometimes, one team just has another team’s number in the big games. That has been the case in regards to the McLean High boys basketball rivalry versus South Lakes in recent seasons.

The game was a do-or-die affair for both teams with the winner moving on to the district semifinals and automatically qualifying for this week’s 16-team Northern Region tournament. Meanwhile, the loser, South Lakes, saw its season come to a halting end. The game qualified for a big upset as the Highlanders (8-15) entered the tournament as the eight-team district’s No. 7 seed, while South Lakes (14-9) came in as the No. 2 seed.

Both teams also met in last year’s first round of the playoffs with the stakes being the same. McLean, then the No. 5 seed, defeated the Seahawks, the No. 4 seed, in that game to end South Lakes’ season. McLean ended up advancing to the district finals before losing to Langley.

Last week, following its win over South Lakes, McLean lost the following day in a district semifinals game to No. 3 Langley, 43-35. That game also took place at South Lakes.

&lt;b&gt;SOUTH LAKES&lt;/b&gt;, over the years, has been one of the most prolific teams in the Northern Region. During the 1980s, ‘90s and into this decade, the Seahawks were a region power under former head coach Wendell Byrd. Byrd stepped down as coach following the end of the 2006-07 season. Under current coach Darryl Branch, who had been a longtime Byrd assistant, South Lakes has put together good regular seasons before falling to the scrappy Highlanders in first-round district play.

McLean lost to South Lakes in both of this winter’s regular season meetings, including a 68-65 home setback in the final game of the regular season on Feb. 13. But when it counted most, the Highlanders, like last season, got the best of the Seahawks in the playoffs and ended their season.

The biggest key to McLean’s playoff win last week was its ability to shut down South Lakes standout guard Travis Williams, a First Team All-Liberty District selection. The senior point guard, the heart and soul of the Seahawks and one of the region’s most prolific players, scored just four points in the playoff game. Four days earlier in the regular-season finale, Williams netted 26 points against the same Highlanders’ squad in his team’s three-point win.

"We knew we could play better [against South Lakes] and the kids were confident going into that [playoff] game," said McLean second-year coach Kevin Roller. "We did a much better job against Travis Williams. We changed the matchup on him and put another player on him. I think we were able to continually pressure him and he never got into the flow."

Williams nailed four 3-pointers against McLean in the regular-season finale. But in the playoff encounter, the Highlanders played him much better. Williams was also simply having a bad shooting night, often missing jump shots when he had good looks.

McLean, which executed well on offense throughout the playoff game, led 31-22 at halftime and went on to play a solid second half. The Highlanders, in the win, had four players finish in double-digit scoring. They were Curtis Symonds (17 points), senior guard Peter Brosnan (13), junior forward Sean Fitzgerald (13) and senior guard Matt Baruch (10).

&lt;b&gt;THE WIN&lt;/b&gt; over South Lakes advanced McLean to last Wednesday’s semifinals against Langley. While the Highlanders gave the defending district champion Saxons all they could handle, Langley came away with the eight-point win. McLean had no answer to stopping Langley shooting guard Derek Baker, who has been one of the region’s most dominant players over the past month. Baker, a First Team All-District selection, scored 21 points, including four 3-pointers, to pace the Saxons.

"The big difference in the game was Derek Baker," said Roller. "Every time he broke loose, he executed. We did a decent job against him defensively, but he had a phenomenal game."

McLean trailed 23-15 at halftime and was down by 11 in the fourth quarter before fighting back to get within three with less than a minute to play. But the Saxons hit several foul shots from there on to gain breathing room and gain the win.

&lt;b&gt;MCLEAN&lt;/b&gt; entered the playoffs playing good basketball. It won four of its final six regular-season games. Those victories, all in the district, came against Jefferson, Stone Bridge, Madison and South Lakes. In another late season game, the Highlanders gave regular-season champion Woodson all it could handle in a 54-49 loss.

McLean had lost six in a row before turning things around over the final three weeks. The scenario was similar to last year when the Highlanders, following tough stretches of play throughout the season, found themselves at the top of their game going into the postseason.

"Last year showed us that you’re always building for the district tournament," said Roller. "The [regular] season is a marathon."

One reason the Highlanders were on a late-season roll was the strong play of Brosnan, the team’s point guard. Last summer, Brosnan broke a wrist and struggled to get back into top form throughout the winter season. But in recent weeks he was back on top of his game. He finished the season averaging 13 points and earned First Team All-District honors.

"He was dealing with [the injury] and not shooting as well the first part of the season," said Roller. "The last few weeks, he was what I hoped he would be."