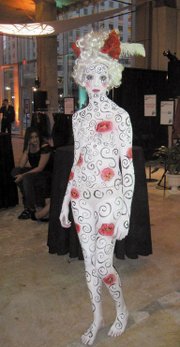 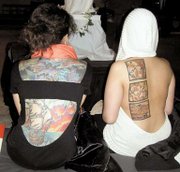 Eighteen-year-old model Lauren McAree, stood in the midst of the crowd last week with black swirls and red flowers all over her body. She appeared like a walking doll, covered in white base paint.

McAree was one of the many models who participated in the Crystal Couture Festival, a two-week long event with a different theme each night. One of the themes last week was Tat Tuesday, with a focus on tattoos and body art. "It’s a lot of fun," McAree said, "A lot of art is involved."

Along with boutiques, Crystal Couture also partnered with Goodwill whose clothing was shown on the runway. Donations were accepted from the public.

Angela Fox, CEO of Crystal City's Business Improvement District, helped coordinate these events. "Our purpose is two-fold," Fox said, "We have opened up the venue which is open for lease. Retailers can come in and see what's available to them. However, we want the community to come out and come together. We're making it a fun community."

On TAT Tuesday, Feb. 17, pretzels and temporary tattoo stickers were placed on tables and organic beer was available for free tasting. Along with McAree, other models were being painted with a variety of colors such as neon green, yellow, white, red, blue and brown. Swirls, whiskers, wigs, feathers, flowers and paw prints accompanied the body paint.

As music accompanied the event and models walked around in their painted costumes, belly dancing was also a part of the entertainment as was Synetic Theatre, which had cast members play a snippet of their current play, "Dante."

Vendors added to the night’s activities. Imani Brown, owner of Artistic Sole, had a smile on her face and danced along to the music with her co-workers. "I have been working with this company for three years. I have always loved art, especially painting. Long story short, I decided to paint on sneakers because they are easier to carry, and since then I have been painting on sneakers," Brown said. The sneakers ranged from cheetah print to President Obama's face in a hue of blue. "I want my customers to feel like they have wearable art," Brown said.

The next evening, Crystal Couture did a 180-degree turn for Wedding Wednesday. Wedding gowns hung in the entrance with lights below them, boutiques stood next to each other, bridesmaid dresses were worn by participants, couture cupcakes and champagne were partaken. Women, mostly brides-to-be, walked around quietly, keeping to themselves and examining the boutiques' accessories for sale. The music was subtle but still made many sway their shoulders and smile at one another. Bridal fashion runways were provided by designers, bridal magazines were distributed and hair and make-up was done for free to those interested.

Beth Cullen, a resident of Clarendon, had heard about the event through her mom. "I was coming expecting clothes and jewelry. I wanted a better idea of boutiques in the area and I love the cupcakes," Cullen said.

The women outnumbered the men. In the crowd, Lee Bacon and Arman Stewart browsed boutiques together, laughing at each other as they conversed with boutique owners. Asked their reason for coming, Bacon said, "I have a friend that is helping out with this event so Lee and I decided to come and support him."

Bacon said, "We had no idea it was a bridal fashion show. However, this is really interesting and we have gained a lot." Stewart nodded and said, "This was rather astonishing. In fact, quite interesting with a variety of people and a variety of booths and I like how it all touches different facets of wedding planning,"