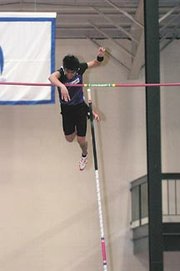 On Wesley Sun’s first pole vault attempt last Saturday, he didn’t even touch the bar, which sat 15 feet above the ground. Not in a good way either, as he soared under -- as opposed to over -- the bar. On his second try, things got worse when Sun stopped short of even making an attempt.

But Sun’s third shot at setting a meet record looked nothing like the previous two. He cleared the bar, broke the previous record of 14-10, smiled and pumped his right fist, as other members of the Chantilly boys indoor track and field team rushed to congratulate him.

“My step has been off, and I’ve been doing everything on the third attempt,” said Sun at this past weekend’s Northern Region indoor track and field championships at George Mason University. “I finally got it on that last one. Everything just clicked.”

Sun was one of three regional champions for third-place Chantilly, joining Chris Foley and Mohammed Labor-Koroma. Foley won the 3,200-meter run with a time of 9 minutes, 30.84 seconds and Labor-Koroma was first in the 500 at 1:06.77.

“It was cool watching Wes break his own school record again and watching ‘Mo’ win the 500,” Foley said. “It was definitely an inspiration going into my race.”

At the Virginia AAA state girls gymnastics championships, held last weekend at West Potomac High School, Chantilly finished third as a team and senior Elly Taura took eighth in the all-around competition. The Chargers totaled 144.975 points, 5.925 less than first-place Osbourn Park. Taura, who won the all-around portions at both the Concorde District and Northern Region meets earlier this month, earned a score of 37.900, finishing fifth on floor (9.550), 15th on the balance beam (9.450), 18th on bars (9.225) and fifth on the vault (9.675). Kellam’s Kirsten Strausbaugh was first with a mark of 39.250. Chantilly won its first district and region titles since 2000 this season.

When he was around 11 or 12 years old, Benecki, as a member of USA Swimming, used to swim in Potomac Valley meets at the Freedom Center on George Mason University’s Prince William Campus -- the site of last weekend’s Virginia AAA state swim and dive finals.

“It feels good to be back. I feel like I have to swim fast in this pool,” said Benecki, minutes after breaking his own state record in the 500-yard freestyle with a time of 4 minutes, 25.72 seconds. “I just told myself that no matter what happens at this meet, I was just going to try as hard as I could and have fun.”

Benecki also held off rival Bradley Phillips (second, 4:30.89) of Oakton for the title. Phillips topped Benecki by nearly five seconds at the Concorde District finals on Feb. 8, but Benecki responded by barely edging Phillips at the Northern Region meet a week later.

“It feels really good because I knew Bradley Phillips was going to put up a good race,” said Benecki, who’ll attend the University of Minnesota in the fall. “Just to be able to beat him and lower my state record a little bit feels really good.”

Amanda O’Sullivan, a senior lacrosse player at Westfield High School, will continue her career at Division I Colgate, the university announced last Friday. A midfielder, O’Sullivan tallied 53 goals and 13 assists en route to All-Concorde District and All-Northern Region honors this past season. Westfield was 17-14 overall and advanced to the regional semifinals and state quarterfinals, with O’Sullivan earning team MVP honors for the second consecutive year. Colgate, located in Hamilton, N.Y., went 11-5 last spring, including a 5-1 mark in Patriot League play.

Austin Fallon, a 189-pound senior at Westfield, was the area’s lone first-place finisher at last weekend’s Virginia AAA wrestling finals in Chesapeake. Fallon earned his fifth win over Marcus Hathaway this season by a score of 5-2, and, in the process, secured his first-ever state crown.

Fallon helped Westfield finish seventh as a team with 72 points, 49 behind first-place Colonial Forge and was one of five Bulldogs to place in the top seven spots. Brandon Berling (130) and Nick Grinups (145), Jeremy Ryan (112) was sixth and Kyle Arnold (135) was seventh.