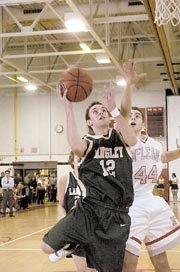 A year ago, McLean, as a No. 6 seed, upset No. 3 South Lakes. The Highlanders ended up going to the district finals before losing to Langley.

McLean, earlier this week, needed to defeat South Lakes in order to qualify for next week’s 16-team Northern Region tournament. For the loser of the McLean-South Lakes contest, the season will be over. The winner, meanwhile, will advance to Wednesday’s semifinals against the Langley (No. 3 seed) versus Marshall (No. 6) winner. The district title game is scheduled for this Friday night at South Lakes.

W.T. Woodson is the tournament’s No. 1 seed.

McLean went 7-7 in district play this winter and was 12-10 overall going into the postseason. Prior to last Friday’s loss to regular season district champion South Lakes, the Highlanders had won back-to-back games over Stone Bridge and Marshall.

The state AAA wrestling championships will be held this weekend in Salem.

McLean’s Eva Greene won the girls 100 back event and was second in the 100 free. Teammate Margaret Harlow was third in the 500 free.