Harambee Ceremony honors the contributions that make a community. 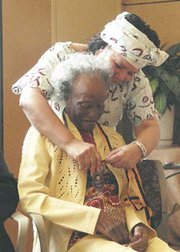 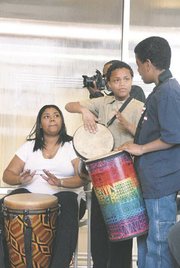 Shameeka "Mimi" Brown and students from the Walter Reed After School Program sound the drums as the honorees are escorted from the hall.

When Janie Key retired from a career as a supervisor in the United States Department of Defense, she could have chosen to sit back and enjoy her golden years peacefully and quietly. Instead she chose to spend them in Arlington Hospital, greeting and registering surgical patients.

"I couldn't stay in the house," Key said of the 3,700-plus volunteer hours she has logged at Arlington Hospital since her retirement. That is nearly two years worth of working hours, noted Planning Commissioner Christian Dorsey as he detailed the service that Key and eight others have provided to the Arlington community throughout their lives at the 12th Annual Harambee Ceremony at Walter Reed Community Center. Dorsey helped lead the annual tradition that he said has grown over the years to honor elder African-American members of the community. The word "Harambee" is a Swahili word that means to work together for a common purpose, and more than 100 of the honorees friends and family showed up on Saturday to honor them for their work.

In addition to Key, this year's honorees were Fred Brooks, Odell Perry (honored, but not present), D. Melvin Green, Ethel Spriggs, Alfred Forman, Marian Lee, Elmer Harris, and Frances Sellers. Those honored have given back through their families, their churches, their neighborhoods and various community and civic groups, people whose contributions don't gain public recognition yet touch the lives of many.

"These are people we don't typically think of as community heroes, and that's a shame," Dorsey said.

Many of the honorees grew up and began their families in Arlington prior to the desegregation of the county school system and the recent election of President Barack Obama was a milestone that they could have only imagined a few years ago, Dorsey said.

"We've got a lot of hope in America today," said Dorsey.

As those who fought the civil rights battles of the 1960s dwindle in number, ceremonies such as Saturday's Harambee ceremony are that much more important, said County Board member Mary Hynes.

"Really so many of the pioneers are getting old and this is really a way to honor them," she said.

Afterwards Harris said that he never expected to be publicly recognized for his work in the Arlington Parks and Recreation Department, where in 1974 he became the department's first black supervisor, responsible for maintenance of parks in the southern part of the county.

"For one, it was quite a surprise," Harris said of being told he would be honored. "I've lived my whole life not expecting any recognition. It's been an honor I can't describe … although I don't think I've done anything special."