"Hail to the Chief:" A Presidential Tribute
Votes

"Hail to the Chief:" A Presidential Tribute

Walking Washington's town from his youth to his funeral.

The "Hail to The Chief" exhibit at the Alexandria Archaeology Museum pays tribute to five past American presidents. 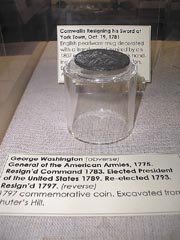 A rare 1797 medal commemorating George Washington's refusal to accept a third term is part of Alexandria Archaeology Museum's exhibit "Hail to the Chief."

The big parade is history for another year, as are all the events of the four-day weekend holiday, now known as President's Day, honoring the birthdays of our first and 16th presidents. But, a tribute to them and three other commanders-in-chief is alive and well at the Torpedo Factory Art Center, 105 N. Union St., #327.

Entitled "Hail to the Chief," this mini exhibit in the Alexandria Archaeology Museum on the center's third floor showcases the presidencies of George Washington, Andrew Jackson, Abraham Lincoln, Ulysses Grant and William Henry Harrison through an array of artifacts unearthed in Alexandria. Centerpiece of the show is the 1797 medal commemorating Washington's decision to step down as commander-in-chief.

"It is composed of items out of our collection from all over Alexandria," said Alexandria City Archaeologist Pamela Cressey. Each item's significance and history is described on an accompanying card.

"These artifacts were discovered over a period of time through a series of digs in various areas of the city. The oldest artifact on display is the commemorative medal which was discovered during a dig at Shuter's Hill," said Ruth Reeder, museum educator.

"It was actually discovered about 10 years ago but we didn't realize what we had at that time. I Googled the medal and discovered it was much older than we had thought," she said.

The medal had been on display at the Masonic Memorial Temple for a number of years on loan from the museum, according to Reeder. The free exhibit will be on display through Tuesday, March 31, during museum hours: Tuesday to Friday, 10 a.m. to 3 p.m.; Saturday, 10 a.m. to 5 p.m.; and Sunday 1 p.m. to 5 p.m. For more information visit alexandriaarchaeology.org or call 703-838-4399.

WITH WASHINGTON'S actual birthday being this Sunday, Feb. 22, those who want to know more about his life and times can take a self-guided walking tour of Alexandria sites associated with the first president. It explores many sites associated with Washington’s long relationship with this seaport city. Included are:

* Light Horse Harry Lee's house at 611 Cameron St. Lee wrote the famous words of Washington's eulogy: "First in war. First in peace, and first in the hearts of his countrymen."

* DuVall's Tavern, 305 Cameron St, where Alexandrians had a reception in December 1783 honoring Washington upon his return from the Revolutionary War.

* Dr. Elisha Cullen Dick's home at 209/211 Prince St. He was one of three physicians present at Washington's death and conducted the full Masonic rites at Washington's funeral.

All in all there are 21 sites on this tour. They put into perspective the varied elements of Washington life and character which firmly established the country’s democratic form of government with his refusal to not only be named "king" but also to serve a third term as president. "Walking With Washington" brochures, with a map locating the various sites, are available at the museum.