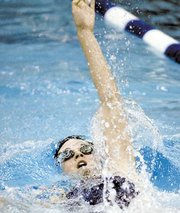 At the Northern Region swim and dive championships, Fairfax senior Theresa Harvey took second in the 200-yard freestyle and third in the 100 freestyle.

Meredith Harris, the Fairfax swim and dive team’s second-year head coach, laughed as she said it, but she still couldn’t help herself from delivering the line.

The first four will graduate this spring and Gehrke’s family is moving to Asia. On Saturday night, Feb. 14 at Oak Marr RECenter for the Northern Region swim and dive finals, the “babies” gave their “mom” something to smile about, finishing second to Robinson, 301-222.

“It’s our last year together at regionals, and we really wanted to get the record and get first and we did,” Baumgardner said of the 200 freestyle squad. “We spent all week getting pumped up.”

On the boys side, Fairfax finished fourth with 186 points, led by Joey Kelly’s team-best 27. The 200 freestyle relay team, which consisted of Ryan Larson, Travis Lauri, Kelly and Alex Price, finished second in 1:27.19.

“Our boys getting fourth this year was unbelievable,” Harris said. “They had the drive. They had the ‘want to’ this year, and they proved it.”