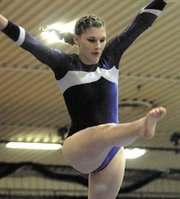 Ask any coach after any sporting event and they won’t deny it: home-field or home-court advantage is exactly that, an advantage. But in gymnastics, that advantage has an added level of importance because competitors don’t have to adjust to a new set of equipment.

“You’re comfortable because you know what to expect,” said Lake Braddock coach Ellen Hagan-Bowerman after this past weekend’s Northern Region championships, which took place at Lake Braddock. “It’s what they practice on every day.”

Lake Braddock took advantage of its familiar surroundings with a second-place finish, trailing Chantilly by a score of 144.250-138.775.

The Bruins were led by senior Emily Parillo, who finished second on vault, tied for sixth on bars, first on the balance beam and second on floor. Parillo trailed only Chantilly’s Elly Taura for all-around honors, 37.675-37.525.

“I just wanted to hit all of my events,” said Parillo, who, along with her team, will advance to this weekend’s Virginia AAA state championships at West Potomac. “The crowd was really good and they helped me a lot.”

Burke native Chrissy Franzel, a senior at Jefferson, took fifth in the all-around portion, producing a score of 36.000. Franzel medaled on the balance beam, finishing third with a score of 9.200.

Lake Braddock senior George Billy suffered an uncharacteristic loss on Jan. 2. But with his pin of Westfield’s John Orchard-Hays Saturday, Feb. 14, the 119-pound Billy took one step closer to his final goal of the season.

“I want to face [Colonial Forge’s Shane] Gentry again and get my revenge,” said Billy, whose 4-0 loss was a part of the Battlefield Duals. Billy beat Gentry, 4-2, in last year’s Virginia AAA state title match

Wrestling at Fairfax High School for the finals of the Northern Region tournament, Billy needed only 2 minutes, 34 seconds to dispose of Orchard-Hays.

“I just went out there, went as hard as I could and tried to get the pin,” said Billy, who was named the event’s most valuable wrestler, scoring four pins in 8:12 throughout the event.

Next up for Billy and other top-four finishers are the Virginia AAA state finals this weekend at Oscar Smith High School in Chesapeake.

Thanks to a third-place effort from freshman Amanda Famiglietti, the Robinson girls gymnastics team had its most satisfying performance of the season at last Thursday’s Northern Region championships.

Her total of 36.575 points trailed only Emily Parillo of Lake Braddock (37.525) and Taura (37.675). Famiglietti will advance to this weekend’s Virginia AAA state finals at West Potomac.

As a team, Robinson finished fourth with a total score of 136.000, trailing Stone Bridge, Lake Braddock and first-place Chantilly, which won its first region title since 2000 with 144.250 points.

“We had a great night,” Smiley said. “It was the best meet of our season. We just came out there trying to do our best, and we hit all of our routines.”

During the final round of the Northern Region wrestling tournament this past Saturday at Fairfax High School, Robinson junior Roman Perryman became a part-time coach.

Following his 4-0 win over Westfield’s Kyle Arnold, the 135-pound Perryman knelt near the corner of the mat and shouted instructions to his friend and former training partner, 140-pound Ross Renzi of Lake Braddock.

Renzi eventually suffered a 3-2 loss to Jefferson’s Mike Howard but not before Perryman did his best impersonation of Bryan Hazard, the Rams’ actual head coach.

“I always like cheering on my friends,” said Perryman, whose team finished second to Westfield, 220.5-198. “I feel like I can help them … if they can hear me.”

Robinson’s other first-place finisher Saturday was 103-pound Jake Smith, who kick-started the final set of matches with a 1-0 victory of Anthony Kotoriy of Langley. Next up for Robinson is the Virginia AAA state meet at Oscar Smith High School in Chesapeake.

“I thought I wrestled well, almost to the best of my ability,” said Smith, who has now won district and regional titles as a freshman. “It’s just another stepping stone to where I really want to be, winning states next week.”