Cheryl Barnes will celebrate Presidents Day with a book signing in Old Town. 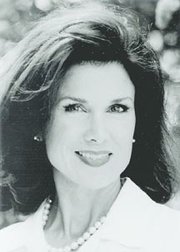 &lt;i&gt;A native of Alexandria, Cheryl Barnes graduated from St. Agnes High School in 1971 before studying political science at Randolph Macon Women’s College. After graduating college, she went to work as a real-estate broker for Shaw Real Estate in Alexandria. She later started an architectural firm in California before writing a series of books for children, including "Alexander the Old Town Mouse," "Marshall the Courthouse Mouse" and "President Adams’ Alligator."&lt;/i&gt;

I was a single mom in Los Angeles when I met my current husband Peter, and I’ve been married to him for almost 20 years now. Peter was the guy who actually came up with the idea for a book about his hometown Nantucket. So he came up with the idea for Nat, Nat the Nantucket Cat. It was that book that really got us started in the publishing business.

Nat, Nat the Nantucket Cat was about Peter’s hometown, and I wanted to do a book about my hometown. So I started to get this idea about a book about Old Town. I went to the city archeologist and asked what kind of animal it should be, and she immediately said it should be a mouse because there are so many mice in all the archeological digs.

I didn’t really know what I was doing when I started drawing. I never had an art course or anything. So I would just kind of do it in a very rudimentary way. Then I guess with practice I just got pretty darn good at it. I just kind of came up with my own style over time because it just kind of evolved. I would like to think I’ve gotten better because I practice a lot, and I’ve taken a few watercolors classes over the years also to expedite things.

&lt;b&gt;Where do you come up with the concepts for these books?&lt;/b&gt;

Peter came up with the idea for the first book, then of course we wanted to do a book about Alexandria. Then I was approached by a woman at the White House who was interested in a children’s book about the White House, and I was very intimidated by that prospect but I went along with it. Since then the Kennedy Center and the Capitol Visitors’ Center have approached me. So I really take it one book at a time. Somehow it works.

&lt;b&gt;What kind of a response have you gotten from kids who read the books?&lt;/b&gt;

When I walk into a school it feels like I’m a rock star. They think what I do is so cool. They love learning about the history, and I try to be a big personality and really make it exciting. The kids love learning, and they are like little sponges. So I teach about presidents through their pets — like George Washington must have had a really good sense of humor because he had a dog named Sweet Lips and another dog named Madam Moose. So the kids really get intrigued when it isn’t just black-and-white boring history.