Butts Breaks Through at District Championships 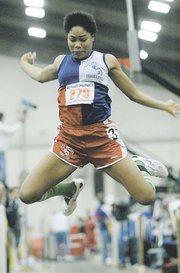 T.C. Williams senior Tynita Butts set a Patriot District Championship meet record in the long jump, winning the event with a mark of 19-feet exactly. It was one of two records she set last Saturday.

Having broken track record after track record the past few years, nothing should surprise T.C. Williams senior Tynita Butts anymore. Last Saturday at the Patriot District Indoor Track Championships looked to be more of the same with Butts ho-humming her way to two more record-setting performances.

But it was another first-place finish that had the superstar talking about an accomplishment she “never thought would happen.” In winning the 300-meter dash in a time of 42.91 seconds, Butts went under the 43-second barrier for the first time in her career.

It was an example of the hard work the talented sprinter and jumper has been putting in of late. Good news for her but an even worse realization for the rest of the competition.

“My work ethic is getting way better,” said Butts, who holds just about every track and field record in T.C. Williams history. “I’m not as lazy as I used to be. I don’t rely on my natural talent anymore. … I don’t skip practice no more. I used to because I didn’t feel like going. I’d be like, ‘Nah, my shins are bothering me.’ I used to make up excuses, but that’s all over. It’s my last year and I’d rather go out strong.”

She certainly made the rest of the Patriot District aware of her intentions last weekend, winning four events — two of which came in meet record time — and placing third in another to help the T.C. Williams girl’s track and field team to a third-place finish overall.

Specifically her 5-foot-6 and a half mark in the high jump and 19-foot mark in the long jump set Patriot District Championship records, although both could have been wiped out by an even larger margin. Butts said she was disappointed with her high jump, calling 5-feet-8 inches her “standard.”

And her win in the 55-meter dash (7.27 seconds) is even more impressive when factored with her sore shins, which really started bothering her in the 4x400-meter relay — her lone loss of the afternoon, if there is such a thing.

Throw in a new weapon in her arsenal of races and there’s no telling how many more records Butts will take down by the end of this season.

“By regionals, I think you’re going to see a 300 you won’t believe with her,” said coach Marshall Edmonds. “She knows it’s in her.”

&lt;b&gt;BUTTS WASN’T&lt;/b&gt; the only standout for the Titans, though, whose boy’s team finished in fifth place overall. In addition to its superstar, the T.C. Williams girls also got strong performances from senior Latona Jackson (2nd place shot put) and senior Erika Weidman (2nd place 1000-meter run).

On the boy’s side of the equation, the Titans got off to a slow start, but were buoyed by senior Pierre Espinoza’s first-place finish in the shot put. Then the 4x200-meter relay team of senior Reward Asonye, sophomore Oliver Jones, senior Rushane Wilson, and senior Marc Grosser upset Hayfield with a time of 1:36.82 in a very tight race.

“That was a catalyst,” said Edmonds. “It snapped the whole team up.”

Grosser also placed second in the boy’s high jump and was a part of the Titans’ first-place 4x400-meter relay team alongside seniors Yasir Hussein and Spencer Bailey and junior William Murphy. Asanye went on to take second in the boy’s 55-meter dash.

T.C. Williams and Butts now move onto the Northern Region Championships, which are scheduled for Feb. 21 on the campus of George Mason University.