Marian Van Landingham, the guiding light behind the founding of the Torpedo Factory Art Center, sits in her river view studio with one of her pet dachshunds, Spike, as she related stories of the early days of the now nationally famous working artists center in Old Town.

A naval torpedo on the first floor of the Torpedo Factory Art Center is a reminder of the building's original use during World Wars I and II.

A display on the first floor of the Torpedo Factory Art Center tells the story of the building's original use as a part of the nation's war efforts during World Wars I and II. 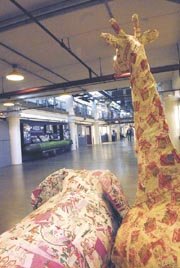 A giraffe and friend watch over the studio corridor on the first level of the factory. 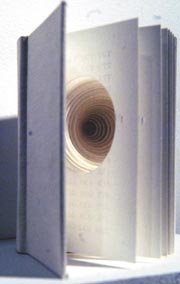 "M168:Tracing the Y Chromosome" by Geraldine Ondrizek is part of the "Bookends: The Book as Art" exhibit at the Target Gallery in the Torpedo Factory.

"Shorthand" by M. Helsenrott Hochhauser is part of the "Bookends: The Book as Art" exhibit at the Target Gallery in the Torpedo Factory.

From "Dido’s Lament #3" by Kathleen Hancock

"Persephone Pomegranate Book" by Risa Gettler is part of the "Bookends: The Book as Art" exhibit at the Target Gallery in the Torpedo Factory. 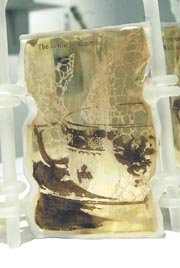 Glass Book Series (detail), "Accordion Book: Teacup Conversation" by Elizabeth Ryland Mears is part of the "Bookends: The Book as Art" exhibit at the Target Gallery in the Torpedo Factory.

Thirty five years ago it was just an ugly building filled with old World War II files and excess federal government furniture. Many in Alexandria saw it as not only an eye sore but also an obstruction to their vision of waterfront open space.

Then there was Marian Van Landingham. To her it was an opportunity to create an art center like no other in the nation. It could be a place were artists worked in full view. Individual studios would be open to visitors where art lovers and creators could intertwine their shared love of art.

This place had been a factory for the manufacture of weapons of war. Now it could be a multi-dimensional, thriving example of the old prophesy of "swords into plowshares."

It could offer the opportunity for a shared experience by resident and visitor, adult and child, artist and patron, admirer and detractor.

As a result of that vision, the former torpedo factory — which came into existence at the end of World War I and supplied torpedoes to the U.S. Navy during World War II through the efforts of 5,000 to 6,000 munitions workers — morphed into the Torpedo Factory Art Center, on July 13, 1974, Alexandria’s 225th birthday. It officially opened to the public Sept. 15, 1974.

Today it is home to 165 artists working in 82 studios on three levels in all mediums. It is also home to six galleries, the Art League School, the Alexandria Archaeology Museum, and a major attraction to more than 500,000 visitors per year.

In September 2008 the Art Center initiated its first traveling art exhibition featuring the works of 24 Torpedo Factory artists that will be on display in various cities throughout the nation. It will return to Alexandria in September 2009 with a closing exhibition at the Athenaeum to celebrate the Center's 35th Anniversary.

"We hope to make this a real celebration. On Sept. 10 we are planning a show in the Art Center's Target Gallery for artists from the cities visited by the exhibition," said Mary Cook, director, Target gallery.

"On Friday night, Sept. 11, the Athenaeum is planning a free reception for all the artists whose works were part of traveling exhibit and the public," she said.

BUT, THE BIRTH of the Torpedo Factory Art Center was not an easy one.

"I was president of the Art League at the time and our lease was up on our location on Cameron Street. I was afraid we were about to be priced out of Old Town," said Van Landingham seated in her river view studio with her two dachshund pet dogs.

"This building was in terrible shape with vines growing over it and the dock area was actually crumbling. But, it was the perfect place for open, working studios. And, Alexandria Mayor Charles "Chuck" Beatley was very much in favor of the concept and brought a lot of imagination to the table," Van Landingham said.

"However, there were massive protests against the concept of the art center being located here. Many residents viewed it as preventing their vision of having continuous river open space because of a few selfish artists, as they viewed us," she said.

That opposition is spelled out in Van Landingham's book "On Target" commemorating the Art Center's 25th Anniversary. As one speaker at a City Council meeting on the art center proposal put it, "Destroy that thing and get if off the landscape. If you want to subsidize the arts, do it in another building," Van Landingham recalled in her book.

The artists, led by Van Landingham, mounted a counter offensive to build support for the center. She felt that better communications would turn most opponents into supporters — but not all. That became apparent when Van Landingham reached out to one ardent opponent and was told, "Thank you, but I can spend my time better collecting petitions against you," she noted in her book.

To pacify some of that opposition it was decided to place the Torpedo Factory Art Center on a three-year experimental basis. The Torpedo Factory Artists Association "has a turnkey operation with the City," according to Van Landingham. The City purchased the original four building sites from the federal government in 1969.

During a February 1974 meeting, City Council agreed to appropriate $140,000 to do basic repairs and renovations to the building. They also rezoned it for "this use only," according to Van Landingham.

THE ARTISTS did a great deal of the sprucing up and removal of old federal government "junk" being stored there. Some of that "junk" supplied City Hall and the artists with furniture, including the legs to the conference table in City Council's workroom.

Most of the initial artists were from the Art League. "I collected the first month's rent and put the checks on a bulletin board for council members to see. I think many thought that a bunch of artists were irresponsible when it came to fiscal responsibility," she said.

"I didn't want this to house just a group of itinerant galleries so we established strict rules right from the beginning. Original work had to be done here. And, each artist was required to be in their studio a certain number of hours each week," Van Landingham said.

The Art Center is open seven days a week from 10 a.m. to 6 p.m. year around. On the second Thursday of each month it is open until 9 p.m. with a special event each month. It is closed on Christmas, New Years Day, Easter and a couple of other holidays.

"We all have individual business licenses with the city. We all pay rent for our studios. To become a working artist here you have to be accepted through a tight juried process. And, we have a waiting list," Van Landingham said.

"We are not sales people. We are working artists and we welcome interacting with visitors. For the most part, they are also very respectful of us and usually don't try to talk to us when we are working unless we open up the conversation," she said.

"But, there are funny experiences. I've had many come in a say ‘you have a great office’ and spend their entire time admiring the view of the river without ever looking at a painting," Van Landingham said.

"This concept of artists working in public view also helps the public to understand how we work and broadens their knowledge of art and artists. As one woman was heard telling her small son one day as they toured the Center, ‘see Johnny not all artists are dead and famous.’"

Every year the artists volunteer to paint all of the hallways throughout the Art Center. They also paint the walls of their individual studios annually. The building has been upgraded with heat and air conditioning since that initial opening 35 years ago.

The Torpedo Factory Art Center has served as a national and international prototype for a working art center, according to Van Landingham and is a must stop for Alexandria tourist. Through a series of financial negotiations and a secured long-term lease, Art Center artists now have the "opportunity to keep their dream growing."

"Artists are a funny breed

They shun the comforts other need

With light aglow and dreams to dare ...