Rams Depend on Defense
Votes

Rams Depend on Defense 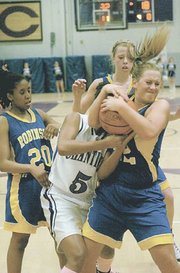 'Defense is pretty much all heart, and I think that’s something we definitely have,’ said Robinson’s Katelyn Priftis, pictured here battling for a jump ball against Chantilly Tuesday night. 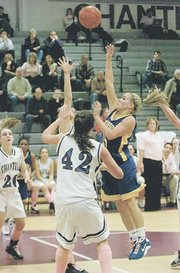 Junior guard Sam Partonen has been one of the Robinson girls basketball team’s most reliable scorers this season. She had 10 points during a 56-40 loss to Chantilly Tuesday. 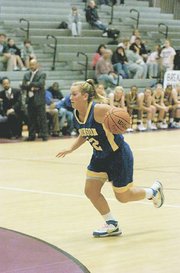 Katelyn Priftis, a 5-foot-7 senior guard at Robinson, drives to the hoop for one of her 10 points Tuesday against Chantilly. Priftis also connected on a pair of 3-pointers.

Throughout much of the 2008-09 season, the Robinson girls basketball team has leaned on its stingy defense. While the offense, featuring two freshmen, a junior and two seniors, has plodded along at times, the team’s defense has been able to consistently clamp down on opponents.

Entering Tuesday night’s game at Chantilly, the Rams were allowing a respectable 46.2 points per game, a middle-of-the-road-type number in the ever-competitive Concorde District.

“Our defense has pretty much been the consistent part for us,” said Rams coach T.J. Dade. “Offensively, we’ve struggled, and we’ve seemed to find little pieces to put together.”

But against the Chargers, Robinson, according to Dade, played tentatively. The team wasn’t closing out on shooters and granted way too many open looks.

When the game ended, Robinson had suffered a 56-40 loss, allowing the fourth-highest point total all season and falling to 10-8 overall, 4-5 in the Concorde District. The Rams get back to action when they host Westfield on Friday night.

“In spurts, we started getting hard close outs, deflections and hard traps,” Dade said. “It was a ‘rollercoaster game’ for us defensively.”

&lt;b&gt;THE LACKLUSTER EFFORT&lt;/b&gt; was made even more surprising because of the successful weekend that the Rams had just enjoyed. In victories over Washington-Lee and Centreville, Robinson had won by an average of 17 points per contest.

Furthermore, the win over Centreville, coupled with a 41-40 victory on Dec. 16, capped a season sweep of the Wildcats. But the Rams were unable to carry any of that momentum into Tuesday’s game.

“[Tuesday] was a bit of a setback, but Friday and Saturday were huge,” said senior guard Katelyn Priftis, who led the offense with 10 points and knocked down a pair of 3-pointers. “I think we took a lot of steps forward and we took a couple back. But it’s nothing that we can’t mend.

After taking a 7-4 lead, Robinson allowed Chantilly to close the first quarter on a 10-0 run. The Chargers continued to surprise even their first-year coach Valerie Allen by knocking down seemingly every shot they took en route to a 28-18 halftime advantage.

“I knew it was going to be a tough game because Robinson is very physical,” Allen said. “They have some good players on their team, and they’re very well coached. I was not expecting a 16-point win.”

Much like they have all season, Priftis and junior Sam Partonen guided the Rams offensively. Partonen finished with 10 points and collected five rebounds. She also drilled a 3-pointer to cut the deficit to 13 (45-32) with 4 minutes, 38 seconds to play.

“We do what we need to do to help the team,” Priftis said. “Whether it means that I score six points and she scores 12, or whether I score 12 and she scores six, it doesn’t matter. On any given night, whoever needs to step up, steps up.”

On the season, Priftis is averaging seven points per game, while Partonen is averaging a team-best 14 per contest. Partonen also averages 3.8 assist per game.

&lt;b&gt;DESPITE ROBINSON’S&lt;/b&gt; performance against Chantilly, Dade isn’t worried. The defensive effort, while he may not be able to explain it, serves as more of the exception than the rule this season. Many times Dade has had to calm his team down, exhorting them to relax and not be so aggressive.

The Rams force an average of 24 turnovers and generate about 20 deflections per game, two numbers that often lead over pursuing an opponent. It’s something Dade would rather work with than what he dealt with Tuesday night.

“I’d rather have an aggressive team and have to tone them down a notch than have to have them buy into being aggressive,” Dade said. “Sometimes, we get over aggressive and that tends to take you out of defensive position.”

“The future looks bright for us, but I’d like to get some stuff done now,” Dade said.

The Chantilly loss aside, Robinson has been getting things done. In a tightly-packed Concorde District, which features a cluster of teams all battling for the right to face undefeated Oakton, the Rams still have two weeks to improve before the district tournament.