Cougars Get the Best of Tough Westfield Team
Votes

Cougars Get the Best of Tough Westfield Team 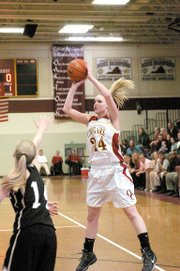 Earlier this season, the Oakton High girls basketball team faced a rare early game deficit against Concorde District opponent Westfield. In that road game, played on Dec. 16, the Cougars trailed by eight points in the first quarter before taking charge from the second quarter onward on way to a decisive 68-57 win.

Last Thursday in the Cougars’ second meeting of the season against the Bulldogs, Oakton was determined not to fall into an early hole. They did not and, instead, built an eight-point lead after one quarter. While Westfield stayed in the ball game, getting within four points in the second half, Oakton went on to get the season sweep over the Bulldogs in a hard-fought 51-43 home win.

Oakton understood going into both of its games against Westfield this season that the Bulldogs would be a difficult opponent.

"We played them before Christmas and they are much improved," said Oakton coach Fred Priester, impressed by the Bulldogs’ showing against his team last week. "It was a very competitive game and our kids were working hard. Both are balanced teams and played good defense."

&lt;b&gt;OAKTON, WHICH LED&lt;/b&gt; Thursday’s contest 25-16 at halftime, converted some key 3-pointers to hold off the charging Westfield team (11-6 overall, 5-3 district) in the second half. Second-half treys from senior forward Erin McGartland (11 points), freshmen guard Caroline Coyer (16 points) and sophomore guard Zora Stephenson (10 points) helped keep the Bulldogs at bay in that latter half.

"I thought we showed a lot of composure when they made a couple of runs," Priester said of his team. "They’d cut it to four and next thing we’d drop a three [pointer]. We responded well to their challenges."

One day after beating Westfield, the Cougars also won on Friday, 56-31, over visiting Chantilly (7-9), to improve their season record to 19-0 overall and 9-0 in the district. McGartland scored 17 points to pace Oakton in that win, while senior guard Sasha Borojeni scored eight points. Caroline and twin sister Katherine Coyer, as well as senior forward Brianna Johnson, each contributed seven points.

Oakton’s defense stepped up against Chantilly. After taking an 11-10 lead after one quarter, Oakton held the Chargers to just three points in both the second and third quarters. The Cougars, behind their defense, built a 30-13 halftime advantage.

"Our defense took control of the game," Priester said.

&lt;b&gt;OAKTON, GOING INTO&lt;/b&gt; this week, had converted 122 3-pointers over its 19 games. That’s nearly seven a game. Priester and his coaching staff encourage their players to shoot the ball from long range if they have the chance.

"It’s a ‘if you’ve got it, shoot it’ kind of thing," Priester said. "Sometimes we’ll take a shot we could do without, but I don’t tell the kids that. I don’t want them to start double-clutching and rethinking [whether to shoot]."

This week, Oakton was scheduled to play district games at Herndon on Feb. 3 and at Fairfax on Feb. 6. Herndon is a team that has been hurt by injuries this season. One of the team’s top players, junior forward Alexis Lewis, has missed most of the season with a knee injury. But she returned to action last week and played well in Herndon’s 54-49 loss to Centreville. Lewis scored six points against the Wildcats.

"Herndon is a very tough team to play," Priester said. "They have really good athletes with Phyllis Martin, whom you have to contend with from the three-point line. And Alexis Lewis is back in their lineup. She’s kind of getting back into game shape."

Fairfax (6-12, 0-8), Oakton’s opponent this Friday night, is a team district opponents should not look past. The Rebels lost to Westfield last Friday night, 70-46.

"Fairfax is playing better, but they haven’t gotten over the hump," Priester said. "People are very aware of their improvement. You better be ready to play them."

Next week, Oakton closes out its regular season with a home game against Centreville on Friday, Feb. 13. The Concorde District tournament is set to begin on Feb. 17.