’Ox’ Whelden a Force on the Mat for Yorktown
Votes

’Ox’ Whelden a Force on the Mat for Yorktown 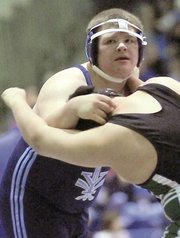 In a matchup of Arlington high school heavyweights, it was the escape ability of the wrestler referred to as "Ox" which determined the winner.

Yorktown sophomore Charlie Whelden earned an escape point in double overtime to defeat Wakefield junior Luis Contreras, 2-1, in a heavyweight match Saturday during second-day action of the NOVA Classic at Fairfax High School. The win helped propel Whelden to a fourth-place finish, the Patriots’ highest of the meet.

The victory was especially sweet for Whelden after losing to Contreras twice the previous year, including a one-point defeat at the National District duals.

"I had a pretty good idea of what he was going to do," Whelden said. "I tried specifically to beat him this year. It wasn’t the blowout I wanted, but I think I did a good job."

The grapplers have developed a friendly rivalry. Whelden’s desire to improve paid off with fewer errors against Contreras.

"Whelden got better," Wakefield head coach Jeff Humphries said. "He’s more aware out there; he started believing in himself more. … He wouldn’t give up a takedown. Last year we scored on his mistake. He took a bad shot, we fell on him and spun, he reaches back, we throw a half and pin him. We capitalized on it. Well, if he doesn’t make a mistake, then we’re kind of screwed."

Contreras’ comments after the match shined light on why Whelden is nicknamed "Ox."

"I knew he was strong, but this year he just got bigger," Contreras said. "My strategy was to wait for him to make a mistake. But when he went down, I just couldn’t keep him down."

Whelden was one of three Yorktown wrestlers to finish in the top six in his respective weight class, joining Hunter Rheaume and Sam Burton.

"Last year as a freshman, [Whelden] went out there, he’s big and strong, but he didn’t know what to do," Patriots head coach James Blanton said. "This year, he’s putting things together in his mind. … [He has improved his] mat awareness, knowing what the score is, understanding the situation and what he needs to do."

Blanton, who wrestled for Howard University at 174 pounds, competes against the Patriots during practice, saying "Every day I’m out there banging, usually with the upper-weight guys. It’s part of the job. I love getting on the mat, rolling around with them. … I let the guys know, if they can hang with me, they’re going to be able to hang with anybody in the state." The coach, from experience, said Whelden provides a tough matchup for opponents.

"He’s a tough guy to wrestle," Blanton said. "I can understand why heavyweights get frustrated wrestling him. He’s strong. He’s not like a sloppy heavyweight where he’s fat all over. His weight is evenly distributed: big legs, big thighs, big stomach, big arms. He’s hard to move around, hard to get out of position."

Rheaume finished fifth at 152 pounds at the NOVA Classic, but wants to get down to 145. Blanton said the senior dedicated himself in of late and has become a better wrestler.

"He’s put in the work in the offseason," Blanton said. "I think at some point after his sophomore year he decided he wanted to be good at the sport. He committed himself to it. He has a positive attitude and he works hard."

Rheaume said he wrestled three days per week during the summer and has noticed an improvement. He has his goals written next to his bed — win the National District and go to the state meet — to keep him motivated when he’s not in the mood to work.

"I look at them every morning and I realize, ‘Hey, I need to work today if I want to reach that goal,’" Rheaume said. "Can’t take days off. My coach says every day you miss is a day you can’t make up."

Rheaume is in his seventh year of wrestling. How did he get started?

"I used to be a really angry kid and then my dad was like, ‘I’ll just stick him in wrestling,’" Rheaume said. "And I really suck at basketball, so that’s what really tied the knot, there."

Burton, a senior, finished sixth at 160 pounds, but would like to get down to 152. He stopped wrestling early due to an injury precaution.

Wakefield head coach Humphries has a message for his team after the NOVA Classic: For the most part, it’s the guys who show up to practice every day who found success at Fairfax High School.

Humphries, a Wakefield graduate who has coached at the school since 1992, wants to restore wrestling popularity in Arlington and build a hard-working group at WHS. This year’s team is led by two-time district champion Carlos Bonilla (140), and district runner-ups Henry Mojano (119) and Victor Leavell (145). Other standouts for the Warriors are: Henry Vasquez (103), Oscar Lobos (189) and Contreras (heavyweight).

Leavell said he feels "a lot healthier" moving from 135 to 145. He wrestled late into the second day.

The Washington-Lee wrestling team finished sixth out of seven teams in the National District last season, a performance head coach Jim Mon described as "poor," and the Generals are looking to improve. Led by Rhyler Heining (152), Manik Sarik (140), Ulysses Smith (189) and Alex Goodahl (heavyweight), Mon said this team is putting forth the effort to get better.

"They know what we did last year wasn’t good enough," Mon said, "and this year they’re working harder."

Ramos, a junior, was a state runner-up last season.

"He is aggressive," Drummond said. "He’s a tough top wrestler. He has a knack of figuring out ways to win a match."

"[Jeney is] battle tested," Drummond said. "Luke knows what it takes to get it done."