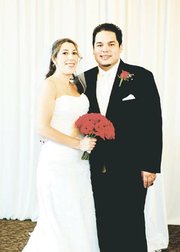 Suzy Lynn Eisinger and Adrian Escalante Jr. were united in marriage on Sept. 19, at the Tower Club in downtown Dallas, Texas. The bride was presented in marriage by her parents and escorted by her father. Heather Wnuk, sister of the bride, and Judy Jernigan, cousin of the bride, served as matrons of honor. Bridesmaids were Peggy Chin-Ortiz, Martha Hollingsworth, Tara Hudson, Karen Dotson and Amanda Dotson. The groom’s best man was Rob Fayard. Groomsmen were Jerome Rose, John Trelford, Theo Jackman, Lenroy Malone, Rob King and Jeff Willix. Ushers were Patrick Swain and Bryan Fagen. The groom’s dog Missy served as the flower girl. The bride’s dog Cash served as the ring bearer. After the ceremony, a dinner and dance reception took place in the Pegasus Ballroom of the Tower Club.

The bride is the daughter of Mr. and Mrs. Roger Eisinger of Fairfax Station. She is a graduate of Thomas Jefferson High School, the University of Virginia and the Yale University School of Management. She is a healthcare consultant with Deloitte Consulting. The groom is the son of Mr. and Mrs. Adrian Escalante of Waco, Texas. He is a graduate of Waco High School and Baylor University. He is a client support manager for Mercer Consulting in Dallas. The couple traveled to Hawaii for their honeymoon. They reside in the northern suburbs of Dallas.