Lake Braddock holds on to lead during a Woodson scoring surge to defeat Woodson 27-20 in ‘mud bowl.’

Lake Braddock’s Osman Mansaray breaks away from the Woodson defense for a 47-yard touchdown. Mansaray finished the game with two rushing touchdowns and 85 yards rushing. 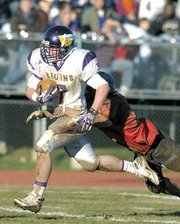 His shoes sunk into Woodson's muddy, war-torn field and his facial expression suggested that even with the clock at zero, the shock of winning still hadn't hit the six-year Lake Braddock coach.

"You wait so long for this. You dream about being competitive and then to win it, it's just a special feeling," he said.

After shaking hands with his opponents, the coach stood near the 40-yard line with a smile on his face. Reality came crashing down on his shoulders in the form of a Gatorade shower.

With the yellow sports drink dripping down his Bruins football coat, it finally hit him: the Bruins are the 2009 Northern Region Division 6 AAA Champs.

"[The Gatorade] was cold, but it woke me up," Poythress said. "I was still kind of dazed out, and when it hit me it was like, 'Wow, this is what we've been working for.'"

The fruits of the Bruins' season-long labors were evident just minutes into the contest.

After a quick field goal drive to start the game, the Bruins defense declared its presence by forcing a fumble and setting up another scoring drive capped by running back Osman Mansaray's 14-yard touchdown run.

The defense's domination continued when defensive back Peres Nubong gave the Bruins a formidable 17-0 lead in the second quarter with a 50-yard interception return for a touchdown.

It wasn't the only time the defense stepped up for the Bruins. At the 3:25 mark of the third quarter, with the Cavaliers driving down the field, senior cornerback Thomas Stickford came up with another momentum-swaying pick.

"We knew we needed turnovers if we wanted to win," Stickford said. "All week, we'd been working on forcing fumbles and getting interceptions."

"The whole defense stepped up and made those plays happen," Poythress said. "Our safeties did a great job of making the situations happen and we were able to get the turnovers."

Despite the turnovers, the Cavaliers’ offense still managed to keep within reach of the Bruins, thanks to another strong performance by quarterback Connor Reilly.

Reilly threw for 301 yards, two passing touchdowns and one rushing touchdown. His play helped the Cavaliers lead a comeback attempt, but momentum drastically changed when the Bruins blocked two of the Cavaliers’ point-after attempts.

"I guess we just wanted it more," said senior offensive lineman Khamrone Kolb, who blocked one of the two point-after attempts. "We pushed them around like they were little kids."

Further adding to the spectacle of the game was the horrid field conditions, which some spectators called "the Mud Bowl." Molasses-thick patches of mud plagued the Woodson field, creating problems for both teams.

"We had to be careful because of the field's messy conditions," Mansaray said. "It was very muddy, slippery and easy for the ball to come loose. You had to keep your body over your feet to keep your balance. But it was kind of fun to play in that."

While the game was billed to be rematch of two passing teams who had previously met on Sept. 11— with Woodson winning 43-42 — it was Lake Braddock's running back Osman Mansaray who played the role of game-changer.

Mansaray finished the game with 85 yards rushing and two rushing touchdowns, including a 47-yard highlight reel rush late in the second quarter.

"It was just a simple counter play," Mansaray said. "It was perfect for their defense. They didn't have anyone deep to guard against the long run. We executed the play perfectly."

Although the season ended for Woodson on a somber note, head coach Trey Taylor commended his team's never-give-up attitude late in the game.

"I'm proud of all of you," he said. "We fought hard and we didn't stop fighting. It didn't end the way we wanted it to, but we fought to the end."

On the opposite side of the field, the Bruins celebration began with the players passing the Northern Region championship trophy around, raising it above their heads and some even kissing it.

The Bruins' players even planted a Lake Braddock flag in the field at the 50-yard line, declaring their dominance over their newfound rival.

Lake Braddock will travel to Battlefield High School in Haymarket on Dec. 5 to face the Bobcats in the Virginia AAA State Semi-finals.