Ethan and Monica Sohn hope one day to compete for the United States in speed skating. 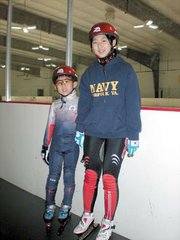 Monica, a student at Lake Braddock Secondary School, and Ethan, a student at Sangster Elementary School, said they both enjoy their time speed skating. ‘I like how the sport challenges me,’ Monica said.

When United States speed skating superstar Apollo Anton Ono takes the ice at the Winter Olympics in Vancouver this February, two youths from the Fairfax Station area will be watching and taking notes on Ono's skating to help improve their own.

At the Prince William Ice House on Nov. 23, 9-year-old Ethan and 14-year-old Monica Sohn took to the ice to practice the skills that might help them one day achieve speed skating glory.

Although it will be some time before the youngster has his chance to qualify for the Olympics, the Sohn family is enjoying participating in the sport.

"A friend of mine started speed skating and told me about it," said Kristen Sohn, Monica and Ethan's mother. "We looked it up on YouTube and we always enjoyed speed skating during the Olympics. We thought we'd give it a try."

What started as a small interest in the sport soon ballooned into a full-fledged commitment.

"The kids really enjoy [speed skating]," Kristen Sohn said. "They've really embraced it and we love it too."

Each of the sibling speedsters has his or her own reason for enjoying the sport, ranging from competing in races to the feeling of making tight turns on the ice.

"I like how the sport challenges me," said Monica, an eighth grader at Lake Braddock Secondary School. "I like the adrenaline rush of being on the ice, racing against other people."

Her brother Ethan, whom Monica said is the fastest of the two, enjoys the sport’s speed element.

Although Ethan and Monica enjoy the sport, setting up practices and finding ice time at local ice rinks can be taxing on their mother.

"It's very demanding [to set up practices]," Kristen Sohn said. "Hockey and figure skating are the two major ice sports and take up most of the ice time. It's a challenge to get on the ice at a reasonable time."

The ice times can vary from after-school sessions at 4:30 p.m. to late-night skates at 11:30 p.m. to 1 a.m. The family must also move from ice rink to ice rink, one day skating at Prince William Ice House and the next traveling to Ashburn Ice House.

"[Ethan and Monica] want to do the practices," Kristen Sohn said. "But it can be hard to get out to them or get everyone ready [because of the time and locations]."

IF PAYING for ice time wasn't enough, the sport's equipment isn't easy on the wallet either.

A pair of speed skates runs about $1,200 and in order to help a skater cut through the air easily, a $150 aerodynamic skin suit is a necessity. Tack on another $100 for a helmet to prevent head injuries in case of a wipe out and $30 for neck guard and gloves.

"It's more expensive than being on a soccer team or playing baseball," Kristen Sohn said. "The costs really add up and then when they grow out of the [skates], you have to get new ones."

"We were just in Ohio," Kristen said. "We have to get ready to go to Pittsburgh, [Pa.], for our next competition this month."

The travel has been worth it for the Sohns. Ethan has competed in four competitions and placed in the top three at three of them.

"It's very [nerve-wracking] in competitions," Ethan said. "But it's exciting at the same time. It's a lot of fun to go out and compete and win."

Monica's speed skating success has been hindered by an injury she suffered two months ago during a race.

"I fractured my foot after a fall," Monica said. "I slipped in a corner trying to pass someone."

Despite the setback, Monica said she is anxious to get back into racing form.

With both skaters in the infancy of their speed skating careers, their coach Soo Yeon Yeo, who was a world champion speed skater in 2004 and 2005, said the Sohns have what it takes to go to the next level in skating.

"They have the right attitude and are learning the necessary skills," Yeo said. "They have good balance and you can see they enjoy the sport. They're going to be very good in the future."