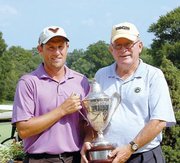 Aspiring tour pro and Alexandria native Chris Derby, second from left, played in the Holden Cup with the support of his high school buddies, all from Alexandria — Andrew Stoiber, Brian Soule, and Joe Soule.

O’Leary tied Baltimore pro David Hutsell after regulation play at 6-under 138. Both had been 9-under after the first four holes of the second round, but the hot and humid conditions gradually ground down the players. O’Leary won on the third sudden-death hole.

“I just tried to play steady in the playoff,” said O’Leary, the PGA director of instruction at Chantilly’s Pleasant Valley Golf Club. “David and I have been in a couple playoffs this season, and I’m glad to get the win.”

Joining O’Leary in the pro-am was fellow Reston resident Danny Ott, a mortgage banker with Wells Fargo. “John did all the heavy lifting today,” said Ott over a plate of wings and a cold beer after Monday’s round. O’Leary shot a 6-under 66 on the 6,965-yard layout, and Ott contributed two birdies. All the amateurs played at scratch.

Tournament host, Alexandria resident Charlie Holden, said the donations that the charity pro-am attracted had fallen this year from 2008. “The $75,000 in donations we received is still a great effort considering the economic climate today,” he said at the pro-am awards dinner. “I am proud to say that our total for the past 10 years is $750,000.”

Donations go to the Alexandria-based Prevent Cancer Foundation. The organization supports cancer prevention research, education, and outreach programs nationwide and has funded the work of more than 400 scientists. See www.preventcancer.org.

Another notable joined the pro field — LPGA player Kris Tschetter. She is trying to get her game back after two successive hip replacements. She has $3 million in tour earnings, but in 11 starts this year, has enjoyed only middling results. She is married to noted golf instructor Kirk Lucas, and they have two daughters and live in Warrenton.

The female junior golfers led the way at the 39th annual PGA Nordlinger Cup at Mount Vernon Country Club Aug. 10-11. Fifteen-year-old Karishma Thiagaraj of Rockville, Md., won overall honors with the tournament’s low score of 8-over, 75-73 – 148. Second in both the Girls 15-18 age division and overall was Clare Connolly of Chevy Chase at 71-78 – 149. Clay O’Connor of Troutville, Va., won the Boys 16-18 and finished low guy with an 11-over, 75-76 – 151. Heat and humidity also finished high during the two sweltering days of the tournament.

“It’s exciting,” Thiagaraj said afterward, “I didn’t know we were playing against the boys.”

The Middle Atlantic section of the PGA sponsors the Nordlinger Cup. Only those players who have excelled on the 2009 MAPGA Junior Tour are invited to join the field.