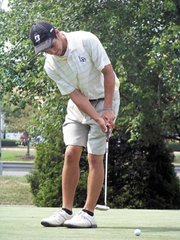 Lake Braddock’s Kenny Towns wasn’t entirely pleased with his 18-hole total of 80 at Monday’s Cougar Classic. His putting, though, was a strong point. ‘I made some putts and saved myself a little bit,’ Towns said.

Unsure of exactly what might happen if he uncorked a full swing with his driver, Kenny Towns was forced to make a few adjustments on Monday afternoon, Aug. 10. Towns, who’s entering his junior season on the golf team at Lake Braddock, possesses a powerful swing, but it’s one that’s almost too powerful sometimes.

At International Country Club for the Cougar Classic, an event that the Bruins haven’t played since 2005, Towns was forced to shift his game down a few gears. At the tee box, he frequently elected to stick with his irons rather than try to control his driver and other woods around several doglegs at International.

“I just didn’t feel accurate enough with my driver,” said Towns, who finished with an 18-hole total of 80. “The holes were short enough to where I could still get my irons out there.”

That Towns was even in that situation came as a surprise to many at Lake Braddock. For the past three seasons, the Bruins have played the Stafford County Invitational, which takes place annually at the Gauntlet at Curtis Park, on the same day as the Cougar Classic. The Bruins finished second in the event last fall.

But this year, head coach Karl Kerns elected not to travel south. Instead, Kerns thought the International would offer an appropriate and difficult test. Lake Braddock finished tied with Madison for fourth place with a team score of 341, while Westfield finished first at 302. Westfield’s Tim Ritter won the individual title with his score of 74.

Because of its multitude of doglegs and blind tee shots, straight drives off the tee are imperative. By electing to use a shorter club off of the tee, Towns was trying to keep things under control and not make too many mistakes. By contract, Lake Braddock plays its home matches at Twin Lakes Golf Course, a longer, runway-style course that favors big hitters and doesn’t punish wayward drives as much.

“Twin Lakes is just straight, and here you have to be more accurate off the tee, which killed me,” Towns said.

All of Lake Braddock’s players struggled a bit, Kerns said, but it’s nothing that should set off any alarms. For the first tournament of the season, Kerns was more than pleased with the Bruins’ performance and valued the challenge that International presented.

“You have to think your way around this course,” Kerns said. “We’re used to playing at Twin Lakes where, if you get on the Lakes Course, you can just bomb it everywhere and make par from anywhere. Here, if you don’t keep it on the fairway you’re going to get in trouble and it’s going to show on the scorecard.”

&lt;b&gt;SOUTH COUNTY’S&lt;/b&gt; top player, sophomore Jake Carey, played in the same four-player grouping as Towns and could commiserate with him. Carey shot an 83 on the day, a total that he wasn’t totally displeased, but still a number that could be improved upon with some consistency.

“I’m just exhausted. It was a tough day,” Carey said. “I hit a few good shots, a few bad shots. But overall it wasn’t awful.”

A 20-year member of International, Caulfield was well aware of the challenge the course presented and even sent an e-mail to his team over the weekend to suggest a few tips for certain holes. As a result, South County finished fifth with a score of 343.

Still, Caulfield wasn’t measuring results. He simply wanted to see his team put forth a quality performance on a difficult course.

“I didn’t expect to see a lot of arithmetic results on the scorecard,” Caulfield said, “but I wanted to see them get the experience of playing at a different place and playing against this level of competition because that’s more what the postseason stuff is going to feel like.”

&lt;b&gt;ROBINSON&lt;/b&gt; finished second with a team score of 315, led by Alex Austin’s third-place 75 and John Dupre’s fourth-place 76. To read more about the Rams, visit www.connectionnewspapers.com.