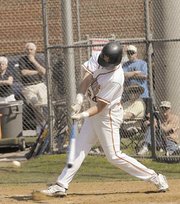 Third baseman Charlie Morgan will be one of five returning starters for the West Springfield baseball team next spring. Behind Morgan and others, the Spartans won their first Northern Region since 1998 this past spring. 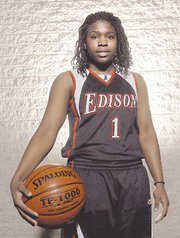 With her 2008-09 averages of 25 points, 5 assists and 7 steals per game, Edison’s Myisha Goodwin was a first team All-Connection pick. This winter, she’ll be one of the Northern Region’s top girls’ basketball players.

Keep an eye on the Lee football team this season. In addition to quarterback Greg Lopez, right, and running back Jazmier Williams, the Lancers have a bunch of talented, hard-working players that could enable them to content within the Patriot District.

Famous Alums: James Dexter, Kara Lawson, Joe Saunders … Dexter was an offensive lineman for the NFL’s Arizona Cardinals and Carolina Panthers … Lawson, a current Sacramento Monarch and former Tennessee Lady Volunteer, won gold with Team USA at the 2008 Beijing Games … Saunders was an all-star selection with the Los Angeles Angels of Anaheim in 2008 when the lefty went 17-7 with a 3.41 ERA.

Famous Alums: Melissa Belote, John Engelberger, Mary Yarrison … Belote won three gold medals at the 1972 Munich Games at the age of 15; Engelberger was drafted in the second round (35th overall) of the 2000 NFL Draft by the 49ers; Yarrison, a three-time state champion diver, went on to the University of Arizona and internal competition after her days as a Lancer.

Famous Alums: Ronnell Felton, Cornell Felton … the Felton brothers provided a steady flow of talent for the Hayfield boys’ basketball teams in the 1990s, winning three district and one region between 1991-98.

Fourteen wins, 11 losses and a first-round Northern Region tournament loss to Oakton didn’t sting as much for West Springfield baseball coach John James because in the spring of 2007 when those occurred, the nucleus of his team was primarily sophomores, a group that stuck together until their senior season this spring.

In 2009, the Spartans re-emerged as one of the area’s most successful baseball programs. From 1974-2000, Ron Tugwell managed West Springfield’s baseball club, becoming one of the most legendary coaches in any sport that the Northern Region has ever produced, winning 12 district, six region and two state titles.

After topping Lake Braddock, 11-1, James, the Spartans’ manager since 2005, collected his first significant piece of hardware.

“This has been a goal for the kids since the fall when school started, and they never lost focus on it,” James said. “It was business as usual, and they wanted it.”

Elsewhere at West Springfield, first-year boys’ lacrosse coach Scott Settar took a 7-5, won the Patriot District and proved the Spartans belonged with lacrosse powers like Langley, W.T. Woodson and Chantilly. And girls’ soccer coach J.T. Alukonis, also in his first year, guided the Spartans to their own Patriot District title and a Northern Region semifinals appearance.

On the hardwood, West Springfield’s girls’ basketball team had yet another strong season under longtime coach Bill Gibson, but over at Lee the boys’ basketball team shocked many en route to a Northern Region semifinal berth.

After two years at West Potomac and one at T.C. Williams, senior forward Frank Holloway Jr. landed at Lee and boosted the Lancers’ reputation. In his first game, Holloway had 24 points and 18 rebounds before earning first team All-Connection honors this past winter.

At Edison, although the girls’ basketball team had its 71-game National District win streak snapped, the Eagles returned one of the region’s most talented players in guard Myisha Goodwin, who averaged 25 points, 5 assists and 7 steals per game and was a first team All-Connection pick.

At least one notable change will be in place at West Springfield this fall as longtime football coach Bill Renner stepped down after last season to focus on his son Bryn’s collegiate career at the University of North Carolina. Stepping in will be former Marshall field boss J.T. Biddison, who inherits a team that finished 8-4 and reached the region semifinals last fall.

“[West Springfield] had had a very strong program, especially in the last couple of years,” said Biddison, who teaches math and special education. He hopes to land a teaching job as well at West Springfield. “I’m real excited to be a part of the Spartan community.”

In addition to Edison, who’s a perennial favorite to win the National District and contend for a Division 5 title, keep an eye on Lee this fall. The Lancers are a hard-working, up-and-coming bunch that may turn a few heads finally.

Edison has struggled in recent years to find National District competition outside of Yorktown, but it likely will arrive this season courtesy of Hayfield. The Eagles and Hawks will meet in Week 10 (Nov. 6, 7:30 p.m.), with a possible district title at stake.