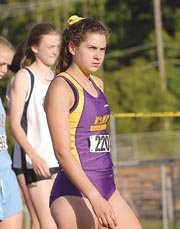 Along with April Robinson, freshman Logan Battle, left, emerged this winter as an integral part of the West Springfield girls’ basketball team, which boasts one of the Springfield area’s strongest programs under 25th-year head coach, Bill Gibson.

Famous Alums: James Dexter, Kara Lawson, Joe Saunders … Dexter was an offensive lineman for the NFL’s Arizona Cardinals and Carolina Panthers … Lawson, a current Sacramento Monarch and former Tennessee Lady Volunteer, won gold with Team USA at the 2008 Beijing Games … Saunders was an all-star selection with the Los Angeles Angels of Anaheim in 2008 when the lefty went 17-7 with a 3.41 ERA.

The first area girls’ team to win a Northern Region title was the Lake Braddock field hockey team, which has been coached for the past 28 years by Diane “O” Miller. After winning what became Miller’s seventh region trophy, Lake Braddock’s players had one goal: The Bruins wanted to win a Virginia AAA state title for their coach, who had never, despite a career that includes more than 400 wins, won one.

Though Lake Braddock felt short, losing 1-0 to Princess Anne in November 2008, the season went a long way toward cementing Lake Braddock’s reputation as one of the area’s top field hockey programs.

“I told them, as long you left everything on the field, there’s nothing else you can do,” Miller said.

The Robinson girls’ indoor track and field team, behind speedy freshman Genamarie McCant and graduating senior Kelly Kavanaugh, finally broke through to win the program’s first region title since 1987. To prove the Lake Braddock girls’ outdoor track and field team’s dominance, put it this way: The last time the Bruins did not win a Northern Region title, this year’s crop of graduating seniors were around 11-years old. The Bruins, with a 105.5-44.5 victory over Robinson this past spring, won their seventh straight region title.

In the pool, it was a typical winter at Robinson … almost. The sun came up. Swimmers abused bottles of body paint and sported funky haircuts. Robinson won a state swim and dive title. However, this time it was the girls’ team that joined in the celebration, matching the boys’ team’s seventh straight state crown with the girls’ first since 1994.

After 10 years on the West Springfield sideline, Bill Renner stepped down as head coach of the football team this past February, paving the way for former Marshall coach J.T. Biddison, who was hired in February. Biddison’s first test will be a tough one, though, as the Spartans play host to Edison in Week 1 (Sept. 3) at 7:30 p.m.