Getting It and Keeping It
Votes

Getting It and Keeping It

Westfield volleyball benefits from an ability to sustain the game’s momentum. 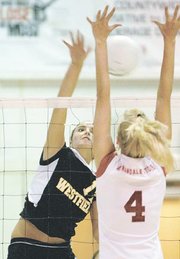 Senior outside hitter Sammy Spees has been a force for the Westfield volleyball team this season. On Tuesday night, in a 3-0 win at Annandale, Spees finished with 17 kills, eight digs and three aces.

Talk to anyone who’s ever coached a high school sport and the word “momentum” will likely, at some point, fly out of his or her mouth. Not that it’s a bad thing, as most high school sports are determined by who has it and

For the Westfield volleyball team, the Bulldogs hardly provide a deviation from this theory. In fact, after the team’s 3-0 win at Annandale on Tuesday night, Westfield did nothing but provide a heap of evidence to support it.

After sprinting out to a 9-0 lead in the first game, Westfield separated itself in Game 2 with an 8-0 run and closed the match with a 6-1 spurt. Three runs attributable to not only execution but also to the team’s concentration.

“We’re trying to work with that,” said Westfield coach Jim Bour, whose team improved to 4-2 with the victory. “If you can get up, just keep trying to build because it’s tough … volleyball’s a momentum thing. As quick as you have it, you can lose it.”

But they didn’t. Not even close.

Westfield used an array of pinpoint passing and lethal serving to quickly dispose of the Atoms.

With senior libero Angie Giancola (7 digs), the anchor of Westfield’s defense, shoring up the middle, Westfield’s top setter, senior Kat Lanigan, went to work. Bour had stressed the importance of crisp passing in practice and all that coaching paid off on Tuesday.

Lanigan totaled 20 assists while the Bulldogs’ front line capitalized on nearly everyone one of them.

&lt;b&gt;TAKE FOR INSTANCE&lt;/b&gt; the total of 28 kills from Westfield’s two top hitters — senior outside hitter Sammy Spees (17) and senior middle blocker Kelly Murray (11) — and the Bulldogs had cooked a recipe that any high school volleyball coach would like to taste. Spees, who has started for the past four years under Bour, also finished with eight digs and three aces.

“I think tonight we had really good team chemistry. Every part of our game was just on, and we were working together really well,” said Spees, who’s been perfecting a nasty jump serve. “It’s always nice to get ahead, and sometimes when we get the momentum from getting a bunch of points, it’s easy to get that lead.”

Bour, who’s compiled a 92-31 record in five-plus seasons at the school, knows all too well how difficult the ever-competitive Concorde District can be.

“We’re in a process of working to get better week by week to get ready for that tough Concorde District battle,” said Bour, whose team will travel to Yorktown on Thursday night. “It’s great to go on the road and play programs like Annandale and work on the things we need to work on.”

After that 9-0 lead to start the game, Westfield allowed Annandale to score consecutive points only once and took Game 1, 25-10.

In Game 2, the Bulldogs started sluggish, but a series of aces from Spees keyed the team’s 8-0 run. The second game went to Westfield, 25-13. In the game, sophomore Emily Kohler totaled four of her seven kills.

In the final game, Annandale got as close as 17-7 before Spees and Murray teamed to turned the Atoms away, 25-13.

“I think our team played really well,” Murray said. “We worked together and just had some good team spirit.”

Not only that, Westfield also had the momentum.